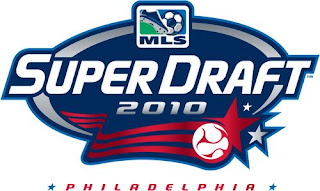 Among the many idiosyncrasies of MLS is their "superdraft" of collegiate players. As I alluded to on an earlier post, College soccer is unique in all the world due to its scope and niche. The draft adds another layer of complexity and uniqueness to the game of soccer in this country and its league, MLS. To recap for futbol fans out there unaccustomed to "drafts," it is a system that allows for the "weaker" teams that finished with the worst records the preceding season to "catch up" to the better teams by drafting the top prospects from college leagues and younger (Adu & Altidore).

I view the draft as link between mainstream American sports and the game of footbal/soccer/futbol. It has more weight in this country because of the way the league is set up (no promotion/relegation) and restrictions on player contracts, salary caps and youth development. It's true that the number one draft pick doesn't always deliver as he did in College, but the same holds true for any sport. The more influential standouts in MLS drafts have been Brian McBride and Maurice Edu. Both had international stature and both delivered on the field. Others like Freddy Adu and Marvell Wynne haven't impressed much, although both are young and still full of possibilities.

The draft is also a strange mix between foreign players and domestic talent to replenish the league after trades to foreign markets and/or lower divisions (USL). Some of them continue on to being US international stars like Marcus Tracy and Jozy Altidore. Some choose to represent their own countries like Bakary Soumare and Alejandro Moreno. Is it so different from major European team scouting both domestically and abroad?

It is true that there is also the "spring" and "fall" transfer windows in MLS and that major international signings supersede the Superdraft. It is also true that without the draft things would be much messier when looking to allocate Collegiate players. After all, this is not a league based on youth development. Colleges and universities provide the majority of the young talent in the league. 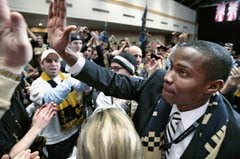 So what do we have this year? Another strong class. Last year, Marcus Tracy and Mike Grella decided to skip MLS. This year, Mwanga, McInerney, Duka and Opara are all staying. Is MLS gaining ground on foreign markets? Yes, in a way. Top prospects usually find it hard to see the pitch abroad (just ask Adu, Grella or even Altidore). Here, they get the playing time they deserve and the minutes on the field that propels them to more prestigious leagues and teams.

The Philadelphia Union will be happy with their new number 10. Maybe they won't need a designated player. Tony Tchani, from the NCAA final, will play in New York. Ike Opara, eventual senior national-teamer, is headed to San Jose. Teal Bunbury becomes the first son of a former MLS player and joins the same team as his father--Kansas City. Okugo and McInerney, US youth squad standouts, join Mwanga at the Union. Dilly Duka has been shipped to Columbus and Blair Gavin (another star of the NCAA final) was chosen by Martin Vasquez and Chivas USA. Many more were chosen today that I will not dwell on. Sometimes the lesser-known tend to be sleepers that turn into bona fide stars. Jozy Altidore, for example, was a round two pick.

We have much to look forward to this season in MLS. The Union has set up a potentially-dominant, young squad that could rival 2009's Seattle Sounders. We will also be keeping tabs on potential national team players...especially during a World Cup year.
Posted by R. Mera Velásquez at 6:02 PM

Don't know much about the young Marcus Tracy. Hope you can tell us more in a subsequent post.