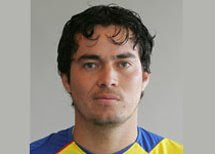 Arguably one of the most notable soccer players in Ecuador's history, Jaime Ivan "El Nine" Kaviedes has always been on the controversial side of the game, both on and off the pitch. While no Dennis Rodman or Ray Lewis or Diego Maradona, Kaviedes has had his share of interesting moments. He is by far, however,
my favorite Ecuador player. 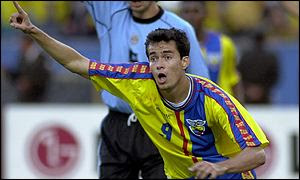 First, a bit of history for those not familiar with the star:
Born on October 24 1977. He has appeared internationally for Ecuador on 53 occasions, scoring 16 times (most recently against Peru in 2007 in an inspired 5-1 win for the 2010 qualifiers). One of his goals came against Uruguay in 2001 sealing a 1-1 draw with a beautiful header that sent Ecuador to its first appearance in a World Cup at KoreaJapan 2002. Of note is also his partnership with Agustin Delgado during the 2002 campaign but being relegated to the bench thereafter with the development of Carlos Tenorio, Felipe Caicedo and Christian Benitez. Kaviedes is also well known for his antics at the 2006 World Cup in which he wore the number 10 jersey and came on as a supersub in every game. He scored against Costa Rica in what surely must have been one of his dreams. After the goal, he slipped out a yellow Spider-Man mask in reference to and memory of striker Otilino Tenorio (died in a car crash in 2005). 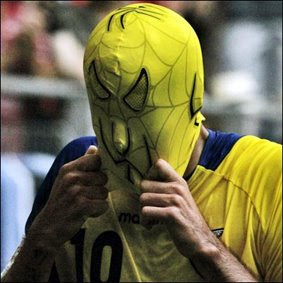 Kaviedes started his career with my favorite club, Emelec, in 1998 scoring 43 goals in the process and earning him an international award. I was witness to two goals scored against arch-rival Barcelona SC of Guayaquil at the Capwell stadium. His prolific goal-scoring led him to Italian Serie A side Perugia. He scored 4 goals with them and was transfered the following year to Celta de Vigo of Spain. Six games with that team were not convincing enough so he was sent to Mexican side Puebla, scoring 5 goals in 17 games. Next came stints at Valladolid (Spain), FC Porto (Portugal), and an eventual return to Ecuador to play for Barcelona SC. There he rekindled his scoring and led Bracelona to the quarter finals of the 2004 Libertadores. Along the way he also played for Deportivo Quito, briefly for Crystal Palace (Barclay's Premier League), Argentinos Jrs, Bracelona again, then El Nacional of Quito in another inspired season (15 goals). His last club was LDU Quito for the present year. A tumultuous relationship with the LDUQ owners and stakeholders meant a permanent absence from any sort of soccer action.
So what's happened to him? Along the way, he was continuously pursued by Ecuador media as their prodigy son and questioned for his methods, absences, extravagances, and personal life. He admitted to suffering from depression on more than one occasion, featuring in Revista Estadio magazine's cover story "Mi Verdad" [My Truth]. I too am partially on the blamers side since my comments were referred to on Ecuador's "Tiro Libre" sports show when I had emailed a note saying the man was being immature (can't quite remember why but I think it had to do with his lack of discipline towards his institution). Clearly the man is guilty of certain things (family problems and neglect, unexplained absences from team practices are some of the allegations against him) but the rest is purely personal. This only adds to his certain mystique and continues to fascinate people such as myself. The man has overflowing talent but is frustrated by his personality, which he lets get the better of him at times. Ultimately, however, his days as a star may be waning. Moves to Lebanon or English League One teams will allow him some playing time but, sadly, not to a return to the national team. I hope to get to see him in action again some day soon. I hope, as many other fans do, that he returns to Emelec to finish his career there and maybe have the team succeed internationally like it hasn't done since the late 90s. Cheers to you, Nine. I hope you're doing well.
Posted by R. Mera Velásquez at 5:39 PM

So much talent gone to waste. If he would have stuck with Liga he would have been champion of the Libertadores, he was a starter before he took off and was scoring. I hope he comes back soon!I'm a Barcelona Fan btw lol.