No Football? No problem!!! 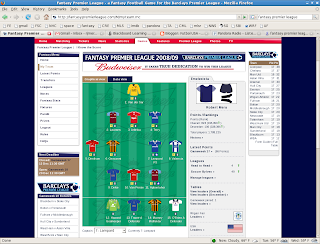 Fantasy, that is. After seasons among the top places in gridiron football fantasy leagues and a few titles, I finally crashed out of the playoff race. So my season was cut short by a month. Or was it? Thanks to my newly acquired virtual soccerbuds (Ives, Goff, BigSoccer, MLSRumors), and actually and more importantly Ives Galarcep of ESPN's Soccernet, I'm able to continue my fantasy play. This time, of course, it's the footy variety and more specifically the EPL (English Premier League). The website is on the official EPL websited at fantasy.premierleague.com and you get 11 starters plus 4 subs. Ives' league has hundreds of players (teams) so a different format is in use as far as points awarded, teams and players. There is a salary cap allowed (100 million pounds) per team and you're allowed to buy any 15 players that fall inside your cap. Points are awarded based on shutouts, goals scored, assists, plus other miscellaneous bonus points. Unfortunately, I did not learn my lesson from fantasy play in that you do not go with your heart and this cost me dearly since I had Felipe Caicedo (Ecuador), Clint Dempsey (USA) in my initial team. Dempsey is playing more these days but was watching from the bench during the first couple of months of the EPL. Caicedo never made it to the first team this season and is probably going to leave the club. So I had to make several changes in my lineup as I learned the game and this cost me points. In this fantasy game you're allowed 1 transfer per week and I had to use 3. That cost me 20 points. I might be in the top 10 if this had not happened. Still, I made up considerable ground in October, going from 250something to the top 30. Lately I had a couple of not-so-good weeks with little help from my strikers. I've made several changes, including adding van Persie, Defoe, Arbeloa, Laursen. I've stuck with Valencia (Ecuador, Wigan), Lampard, Terry, Van der Sar, Agbonlahor, Denilson. Some of my better fantasy pickups are the Marney-Geovanni tandem. Geovanni, specifically, is a good fantasy started as he tears it up with the impressive recently-promoted Hull City. The bench also has Tim Howrd (USA, Everton) for good measure. You are allowed any number of formations as long as you have 3 defnders, 3 midfielders and 1 striker as minimum. My current team has a 3-4-3 line-up with Van der Sar at goal, D: Arbeloa, Laursen, Terry; M: Denilson, Geovanni, Lampard, Valencia; F: Defoe, Agbonlahor, Van Persie. I'm in 49th place after this past weekend. We still got another 5 months worth of football here and I may yet win it all (I heard Ives has prizes). So.... no gridiron? no problem.... Football/soccer rules!
Posted by R. Mera Velásquez at 2:23 PM

I'll try to defend your honor by winning that fantasy football title for you.