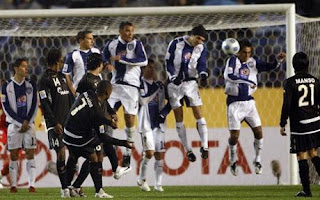 It seemed a dream not too long ago.... an Ecuador club playing for the ultimate crown in world football. And yet if we throw aside the veil of football normalcy we come across a sight seldom seen, none at all predicted, and yet very much a reality. Liga Deportiva Universitaria de Quito, also known as "Liga" will face off against Manchester United in FIFA's Club World Cup.This contest, to some, is little less than a nuisance for European giants like Barcelona, AC Milan and Manchester United and commentators such as the lively Tommy Smyth caution about the Reds performance in the EPL when they've been thrust into this competition. True, the EPL will not see a respite this coming holiday season as leagues in Spain and Germany, not to mention the whole of Latin America are but at its heart the Club Championship still designates the world champion in terms of club competitions. I find it shortsighted to regard the Uefa Champions League as the ultimate club trophy. Does it give you the right to be named world champs? No, it doesn't. In the Americas you also have an older and much more traditional competition in the Copa Libertadores. Concacaf has its own competition as well, as do CAF (Africa), AFC (Asia), and OFC (Oceania). I agree that it is a bit convoluted to bring all these champions to a short two-week torunament in which the South Americans and Europeans get a bye on the first round while skipping out on countless teams swelling with tradition and tallent. That, ladies and gentlemen, is what the World Cup is about. Clubs are important, yes. Everyone has a favorite and emotions run high nonetheless. Pele once said that the future of football would be the clubs and not the countries and that we should concentrate on clubs. Seems odd coming from the man that made the "verdeamarela" so synonimous with soccer worldwide.
But back to the point. Liga beat Pachuca (Mexico champs, Concacaf) by the score of 2-0 in the semifinals in a game that Pachuca deserved better luck in (as well as more help from the ref). Manso's goal in the starting minutes was probably offsides but Luis Bolanos' free kick was a golazo worthy of Beckham, Roberto Carlos, Ronaldinho and Hristo Stoichkov. Bauza's trick with the double wall (Liga players shielded the ball from the Pachuca players before the kick) was a stroke of genius. Excellent defense and some none-calls finished off a wonderful night (morning, thanks to DVR). Liga's cinderella story continues all the way up to facing probably the best team in the world... Manchester United. United beat Gamba Osaka of Japan (AFC champions) by the score of 5-3 today. Liga has seen the likes of San Lorenzo, Boca Juniors, Fluminense, Estudiantes this past year but Rooney, Van der Saar, C. Ronaldo, Giggs, Vidic, Tevez, Ferdinand, Berbatov, Scholes, Andersson, Nani and Co. are another level still. This club final is probably the most (technically) lop-sided match the tournament has seen yet. Previously it had mainly been Conmebol giants like Boca Juniors that faced off against teams like AC Milan. And yet surprises still abound. In 2006 it was modest Internacional de Porto Alegre (Brazil) that beat the FC Barcelona of Ronaldinho, Deco and Eto'o. Anything can happen. That's sports. That's soccer. That's futbol.
Game will be on Fox Soccer Channel at 5:30AM Sunday
Posted by R. Mera Velásquez at 10:45 PM