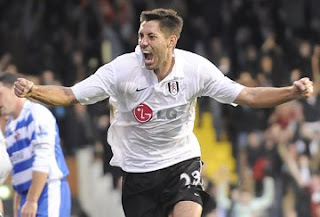 He's back. Sort of. After months on the Fulham bench, [Furman's own] Clint Dempsey has won his place back in the starting lineup. He has scored 4 goals this season. Not bad for an attacking midfielder/forward in the EPL. Dempsey steadily made his way back to the starting lineup amidst an interesting season for Fulham, already in the top 10, and slowly and inexorably making its way out of the relegation ghost that looms in the background for at least 14 teams in the EPL every season (big 4 don't count and Everton and Aston Villa). Why all the fuss? Well, as can be seen from places like SBI and Goal.com, a lot of die-hard American soccer fans care about their wonderboy (myself included). Sure, he's not Altidore in a flashy team like Villareal or Edu and Beasley at Rangers. Dempsey is a lot more like what Americans should be in Europe. He, along with Michael Bradley, Onyewu, Bocanegra, Cherundolo are in mid-table teams without the big stars and where players with true talent can shine. I'm not saying our boys don't belong with the big fellas but we have to realize that the American market is nowhere near as deep as Argentina and Brazil's. I bet that most teams in the world have at least one or two of these nationalities (that's another blog entry). Back to the point... Mid-table teams like Fulham can also be very visible windows for our players so that the big teams can realize their potential without shelving them except for one or two games per season. Dempsey's last two goals came against mighty Chelsea to tie it up 2-2.
I know there's a lot of room for discussion but to me Dempsey is, at the moment, the most complete player in the national team pool. He can attack, dribble, pass, defend, and celebrate. His touches are nothing short of brilliant these days. Best part is we have him for at least two more World Cup rounds. I caught a glimpse of him this October when the US beat Cuba 6-1 in a qualifier and I immediately noticed his pace, awareness, and workmanship. I wish he had scored on that day but I bet I'll get to see it sometime in the future.
Dempsey hails from Nocogdoches, Texas close to my home state of Louisiana. After playing for Furman from 2001-2003 (17 goals in 61 games) he went 8th overall in the MLS draft of 2004, picked by the New England Revolution (11 goals in 62 games). In 2007, Dempsey moved to England to play for Fulham FC of the Barclay's Premier League. Back then Brian McBride and Bocanegra still played for the Cottagers. His only score in his initial season with Fulham came against Liverpool in May of the same year, earning the club 3 points and saved from relegation. The 07-08 season saw Dempsey score 6 goals and was the club's second leading scorer. This season he already has 4 goals in 15 games (not all starting). Internationally, he has scored for the US on 13 occasions, once at WorldCup 2006 against Ghana and last scored in September of this year at Chicago in a game against Trinidad and Tobago.
Posted by R. Mera Velásquez at 7:29 PM

My Furman boy coming up big time against the best - keep up the good work Clint!