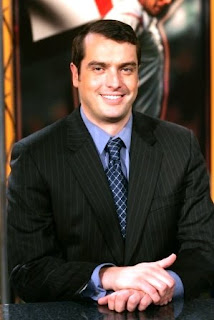 Yeaes! Kinda sounds like the waiter/manager guy from the Simpsons [if you're a true fan of the series]. And yet that is Max Bretos' claim to fame besides his Bretos moments on FSC (Fox Soccer Channel). The guy definitely has to be the most MLS-enthusiastic color commentator if not just plain MLS fan. More so than Rob Stone (ESPN). The man is so excited by the American game that it gets me more into the matches than I would be otherwise. Just today I watched a "season recap" of the Columbus Crew's run for the trophy. I must admit that it was nice to hear his commentary during the short but entertaining 22 minutes of the program with each goal and game in the Crew's winning season. MAx works on MLS broadcasts, Argentina League play, Italian Serie A, Concachampions, as well as other assorted international games. Max is also a professional wrestling broadcaster, and although I may not be a fan of the "sport" I can definitely see him fitting in. The most memorable "Yeaeessssssssssssssss!" by Bretos had to be during the 2007 Concacaf Gold Cup in which Benny Feilhaber scored on a beautiful volley against Mexico, propelling the USA to the championship and a spot in this year's Fifa Confederations Cup to be held in South Africa next summer. So, keep it up, bud... I enjoy the MLS that much more thanks to you.
Posted by R. Mera Velásquez at 12:35 PM