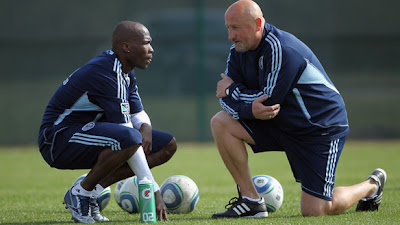 Why did this happen? 1.) NFL lockout, 2.) Ochocinco was an avid soccer player in his youth, 3.) friends with C. Ronaldo, among others, 4.) publicity for the league and the team.

Positives: Okay, benefit of the doubt for the outspoken footballer. He was indeed a fan of the game and a youth player during his teenage years up until the higher paychecks from American football came calling. His friendship with high-profile players like Cristiano Ronaldo are certainly positive. He also conversed with Beckham and Thierry Henry before trialing with SKC. Lastly, MLS is in the public eye for an entirely different reason. More attention equals more appreciation? Perhaps.

Negatives: As a counter for the last point, isn't the type of attention given to MLS for this a bit sad and unsatisfying? Maybe a running joke that this megastar is with a relatively unknown (to mainstream America) soccer team? Although, given his production (actual touchdowns, not fantasy yards) last year of TDs (4 total), it sounds like a mediocre/substitute striker's output for a subpar team.

The NFL lockout is the ultimate driving force for Ochocinco's genuine desire to get back to his soccer roots. That can be taken negatively or positively depending on your point of view. One last thought, though: remember that megastar that switched sports for a bit after temporary retirement? His name was Michael Jordan. It didn't work out.
Posted by R. Mera Velásquez at 4:06 PM

My friend Tedo lives in KC and ran into him on the street this afternoon. He got a great picture of 85 on his I-phone.