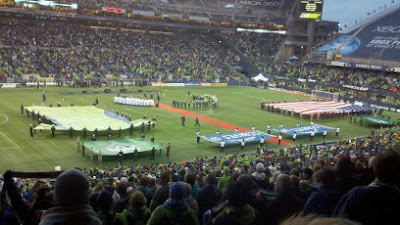 What a game. What sounds. What fans. Everything a soccer fan can hope for--with an American twist. It was the Seattle Sounders FC versus the LA Galaxy. The new (3 seasons now) team versus the old guard. The setting was the superbly-equipped Qwest Field.

On the pitch emotions ran high, kicks when right and wrong, balls flew past goalkeepers, bounced off posts and skidded along the wet grounds. In the stands the enjoyment was permanent. Whether tied at zero or behind 0-1 after Juninho's goal, the unwavering fan base of the Sounders continued their chants. It came from 5-year olds to the ubnoxious young men yelling obscenities at the opposing team. The yells were against Donovan (American hero) and the multi-million dollar Goldenballs: David Beckham. It is team first, country second here.

The Seattle brand of soccer was present with the fireworks at the start of the game and with the (only in America) marching band. Add to this the cross-field chants of "Seattle" to the west and "Sounders" to the east and one is transported to college football. But this is soccer. This is MLS. And this is the point of today's match. Sold out stadium. Radiant fans. Incredible field. Great spectacle. And this is our sport, our American soccer.
Posted by R. Mera Velásquez at 2:20 AM

I watched a couple of their games last year on the tube, its great to see such an amazing atmosphere in the US for a professional soccer game - MLS is making some serious inroads without a doubt. Let's hope that trend continues!