Dos a Cero: for the fans 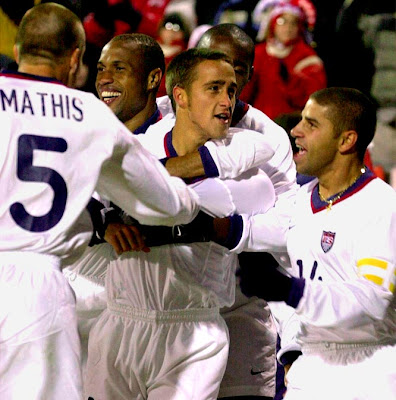 What does it mean to win by the score of 2 to 0? Closure. Endpoint. Triumph. For years, the Concacaf was ruled by one country: Mexico. A soccer nation like few others in the planet. A place that breathes futbol and elevates it to glory. But, on a February night in 2001, all of this changed. The United States sent a clear statement. They won at home. They made their home. For once, the majority in the stands was painted red. The scoreline simply filled the voids.
Dos a Cero was a tribute to the fans. A golden ticket for those who waited to have their team reach the potential that so many knew existed. They say that every journey has a first step. This win in a World Cup qualifier was what Concacaf needed: a change in venue.
Ever since that win the stadiums have looked fuller and, where before American fans were outnumbered by the visitors, more red, white and blue, together, was present. Soccer jerseys sold by the thousands... and just in time for Korea Japan 2002. For not only did this win solidify the US as the number one team in the conference, it also carried them all the way to the quarterfinals of that tournament. The game against Germany was stolen, we know.

And ever since that Dos a Cero, the US has been Number One in qualifying standings, winning every single qualifier home game versus the Aztecas by the same score: Dos a Cero. Columbus takes the credit. The heart of working class America gave us our working class heroes. For that is what the US is know for abroad: teamwork, allegiance, understanding.

Dos a Cero lit up the scoreboard and re-lit MLS: after that we received Donovan, Beasley, Howard, Dempsey, Altidore. Dos a Cero made us smile, cry, dream. This is for you, the fans. We cheer on with every goal scored, missed, surrendered. It doesn't matter. That's why we are fans of the game. Dos a Cero became a poem in our futbol hearts. Cheers to 10 years since that victory.

That second goal is really an iconic moment for me, what a world class move. What ever happened to Wolff, was he just undone by injuries?

Wolff is a blue collar player and not known for much flair. Yes, injuries were a factor, but his style was more suited for MLS.

Wolff's strength did not.