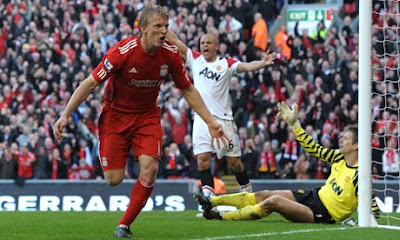 Manchester United all but had this season in their pocket until two weeks ago. First was a loss to fierce rivals and nemesis Chelsea by the score of 2-1. It opened up the league a bit. Then, just yesterday, came a shock loss to long-time arch-rivals Liverpool--by 3-1. Has Sir Alex Ferguson's magic for the season run dry?

Hardly. And yet, we must wonder how it is that a team that had been so dominant in every game at every tournament all of the sudden started to break apart at the seams. A clear answer is its decimated defense. With Rio Ferdinand out, Vidic unavailable and O'Shea on the bench, Wes Brown and Chris Smalling were unable to contain Dirk Kuyt and Luis Suarez. The Reds were determined and the scoreline put it plainly: Manchester United is mortal.

Tell this to Marseille also. The French team is looking to take their 0-0 tie at home to Old Trafford with hopes and prayers that maybe Ferndinand and Vidic can be kept off the pitch. Perhaps it's too tall an order for Marseille. But maybe not so for Arsenal. The Gunners are 3 points behind the Red Devils with a game in hand. A meeting between the two in May could determine the winner of this Premier League season.

Still, no one should take United's recent stumbles as a sure sign of their demise. Clearly, at the beginning of the season it was Chelsea leading the table and poising themselves as the eventual champions. Nothing is ever for certain. Not even for the best of teams. Tell this to Barcelona. Possibly the best squad in the world, the "Blaugrana" tripped up in their visit to Anfield and fell to Arsenal by 1-2. They hadn't lost at all until a Copa del Rey tilt versus Real Betis on January 19.

It's clear that even the best teams are meant to lose games. It keeps things interesting, keeps the ball rolling, keeps ticket sales going and television ratings high. We love to see our teams invincible, but deep down, we always want to see the biggest teams lose once or twice. It gives hope to the weaker sides and helps to keep the superclubs grounded... if just for a day or two.
Posted by R. Mera Velásquez at 1:51 AM

Just a tough part of their schedule with games at Chelsea and Liverpool, who is playing quite well finally. I expect Man United to hold on to their lead in the end, as you say Vidic will be back soon and their offense is only getting better as Rooney re-establishes himself. I can't picture Arsenal as a championship side with some of the failures they have had in key matches like the Carling Cup Final and the points they have blown with the 4-4 choke job against Newcastle and an earlier loss to lowly Wigan. Fabregas didn't look himself today against an admittedly great Barca side - I don't think they can go far without him in good health and hamstring issues can dog a player for an entire season.

You certainly do watch more EPL games than I do. I try to catch as many as I can but I divide my soccer time evenly between Yanks playing abroad with other teams... Although I do average a good 1.5 games per day on a given week.

I'm training pretty much full time now for my walk - I arrange my schedule around the games. EPL beats any other soccer league all to hell (although Barca is the best single team on Earth).

Come on Gunners!! The door is open...