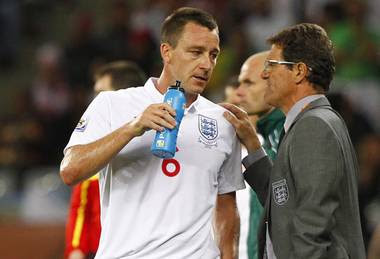 Wow. What a turn of events for the English national team. News broke today that Fabio Capello, manager of England, has resigned from his post following the FA's decision to strip John Terry of his captaincy due to the racial-comment controversy. England's team is again in turmoil ahead of major competition: Euro 2012 and the London Olympics.

Perhaps the most important fact in all of this is that Terry has done it again for England. Yes, his problems with Wayne Bridge prior to World Cup 2010 caused internal strife in the team that took attention away from the pitch and, ultimately, distracted players from what was at stake on the soccer pitch. Would England have been better in group play? If they had won the group they would have evaded the talented German team and, perhaps, could have gotten past Ghana and Uruguay.

It also comes down to Capello's philosophy on and off the pitch. His side was never as dominant as expected from such an experienced and talented coach. Maybe the international scene just didn't suit him but maybe it was his unwillingness to understand and react to non-soccer happenings that pushed him to end his time as England manager. Terry's play has been in decline for some time now, even to the point of relegating him to the Chelsea bench. Having him next to Rio Ferdinand (brother of Anton Ferdinand in the racism controversy) just isn't feasible. This is especially true since Ferdinand continues to be a relevant player in the Premier League and internationally. No, Mr. Capello, Terry just doesn't fit in with the English defense anymore. Worse still would be to keep him as captain.

How does England address this problem? Considering that major international tournaments are so close to this event, important, calculated decisions remain to be made. The track record for most teams around the world indicates that the outcome isn't favorable for England's team. If, however, Harry Redknapp is able to rally his players and country in an unprecedented manner, then there is a chance things may favor the team. This is possible: Aguirre made a difference with Mexico in the previous World Cup cycle, although he had more time than is available for England's next manager prior to the international tournament. However, at that point, Mexico was seeing his qualification in danger. Another example is Luis Fernando Suarez for Ecuador during the 2006 qualifiers. When Hernan Dario Gomez left unexpectedly, Suarez was able to turn the turmoil into the best qualification process the team had ever seen.

So, plenty to digest for English football fans. Difficult times lie ahead, but life after Capello may offer better results on the pitch.
Posted by R. Mera Velásquez at 2:37 PM