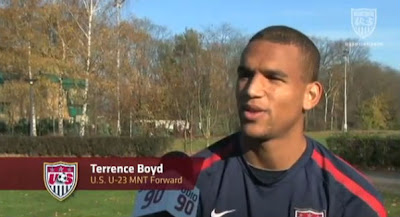 In the past, I have written about Americanizing the Premier League, American Scandinavia and the American Glasgow Rangers. But there is another important piece to Americans playing abroad: Germany.

Indeed, the Bundesliga and 2.Bundesliga has become a target for MLS and college players. Donovan tried his luck with Bayern Leverkusen and Bayern Munich. Steve Cherundolo has been at Hanover all of his professional career. Add to this list Kasey Keller, Michael Bradley, Heath Pearce, DaMarcus Beasley, Jovan Kirovski, and the pattern gains more clarity. The Bundesliga is another American base.

Germany is a tough place to play in. The style is physically demanding and the winters are equally difficult to endure. Michael Bradley soared to new heights with Moenchengladbach but lost his place after coaching changes. Landon Donovan never quite convinced with either team he played for. Beasley scarcely saw the pitch, and neither did Pearce.

But there is another reason why there is a new "American Bundesliga." It is the German connection that the US national team has been able to identify and utilize: Jermaine Jones, Danny Williams, Fabian Johnson, Timmy Chandler, Terrence Boyd. All of these players share the same background: a German mother and an American serviceman. These gentlemen stayed and grew up in Germany and were exposed to soccer from an early age. Their automatic FIFA double nationality means they can choose either country. In their case, there is a long waiting list to be a Germany national team player. This line is shorter for Team USA, especially with Juergen Klinsmann at the helm.

The German connection is quickly Americanizing the Bundesliga in a grassroots manner, from the bottom up. No longer is it just a college or a talented MLS player that gets a shot at playing in this legendary league. Now, the league raises American player as their own through rigorous training, match experience and media coverage. These individuals grow up through each of these team's academies. And thus we reach Terrence Boyd, a striker yet to score for Borussia Dortmund but one that his coach has been prepping for the big time. Who is to say that he can't become a breakout star and finally play alongside Altidore?

Only time will tell how this latest Americanization of European soccer heads to. For Germany, the military connection adds a different route, but considering that Ricardo Clark and Edson Buddle both found successful stints in 2.Bundesliga it can be surmised that Americans are ready for this league. They already own it at every position on the pitch, from the academy to the transfer. So hold on, Bundesliga, the American soccer revolution has just begun in your league.
Posted by R. Mera Velásquez at 3:53 AM