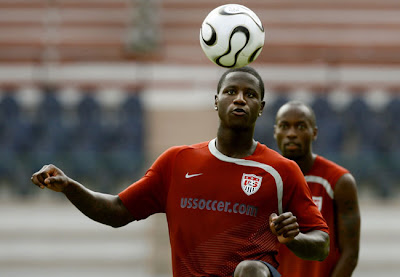 There was once a time when the name "Eddie Johnson" signified the future of American soccer. Today, after 8 months of inactivity due to injury and being out of contract, his time as a potential player for Puebla FC of Mexico's Primera came to an abrupt halt. Lack of fitness and pace doomed his entry to the team and Puebla refused to sign him. This after shunning an MLS return during the summer transfer window.

As a youngster with the U-20 USA team, Johnson scored 23 times in 25 games during 2000-2001. He soon caught the eye of Bruce Arena, then manager of the US national team. Johnson scored 7 goals for Team USA during the World Cup 2006 Qualifiers and cemented his spot as a forward in Germany 2006. He would make two appearances at that tournament and also helped the US win the Concacaf Gold Cup of 2007.

His playing career started with FC Dallas of MLS in 2001 where he was an outstanding attacker amassing 24 goals in 84 games. He transferred to Kansas City in 2006 and scored 17 goals for the team before a blockbuster transfer to Fulham FC of the English Premier League. This was the team of Kasey Keller, Carlos Bocanegra and Clint Dempsey. A Team America in the Premier League? So it seemed until Bocanegra and Keller exited and when Johnson failed to impress.

Johnson was loaned out to Cardiff City for the 2008-2009 season and played 30 games, scoring twice. He became a journeyman, a-la-Adu, when he transferred to Aris Salonika of the Greek League. He scored on 5 occasions for the Greek team but his contract was not extended. Another loan to Preston North End and brief, goal-less times with Fulham concluded in a termination of his contract with his parent club at the close of the 2010/2011 season.

Eddie Johnon had all summer of 2011 to search for a new home in Europe. It did not materialize. It could have been a return to his homeland with MLS but he pulled out of an agreement late in August and thus remained in limbo during the closing months of 2011. No one heard of him until a possible deal with Puebla surfaced earlier in December 2011. Would this be a new beginning for Johnson? A revival like DaMarcus Beasley has been able to attain with the same team? No. And for all the wrong reasons.

Johnson is in danger of becoming a cautionary tale in US Soccer. He is now in a worse position than Freddy Adu was. Adu remained confident and humble at the same time. He was unafraid to rejoin the MLS ranks. Johnson had been in personal decline since his time at Aris ended in 2010. Never recovering both mentally and physically from journeying through Europe at a time when worldwide competition and expectations surpass most player's attributes.

It is sad to see this once-promising young talent slowly fading from view. His decline came as a whimper, not a crash. He will now need to revive his career by joining a team in the lower leagues of US Soccer, perhaps at the NASL or even the USL. Blatant, shocking, to some, were his views about MLS. The league is likely not to pick up on his services while he reconditions himself.

There is a certain mentality to playing abroad and the right conditions at the right team to continue player development. Altidore had to learn this the hard way but his age and international play served him enough to earn a contract with AZ Alkmaar, where he has flourished this past season. Dempsey never went to a bigger club and is happy making history at Fulham. Even Donovan found it hard to play abroad when he tried in Germany. It wasn't until he was mentally ready that a stint with Everton in 2010 brought light that yes, he can cut it abroad. Not all contracts in bigger leagues mean player growth. Sometimes it's just as good to remain home, cement your place with the national team and enjoy playing with the stars at the FIFA World Cup. Just ask Donovan, Ricardo Clark or Sacha Kljestan.
Posted by R. Mera Velásquez at 9:22 PM

I'd heard rumors Donovan made join EPL for another stint this season. Any truth to those reports as far as you know?

Yup, with Everton. He played in the same game Howard scored.