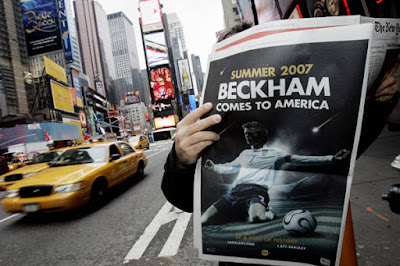 By now mainstream America must know that David Beckham has signed a new two-year contract with Major League Soccer. Becks will remain an LA Galaxy player until the sunset of his playing career. And all of us, whether critic, fan or sympathizer, are thankful for it.

Why do we feel this is positive for the league? Endurance. Beckham has the name and the appeal to transcend into pop culture like no other player can. Sure, Landon Donovan made a name for himself, as did Abby Wambach and Hope Solo. But pop culture favors Beckham and you can't buy that any other way.

For the sport he still has plenty to offer. Beckham is competitive (his yellow card sum is impressive), has vision (Donovan's game-winning goal at MLS Cup 2011 started with Beckham), and also has the magic "bend" to his free kicks. He will prove insrumental if the Galaxy are to be successful in the Concacaf Champions League this spring. Having both Donovan and Keane back means the team's attacking spine remains intact.

In the end, Beckham's decision was as much about family as it was about the love for the sport. In America a new niche has finally coalesced around soccer from the Pacific Northwest to the entrance of Philadelphia, Toronto and Montreal, and to the building of new stadiums all around the country. The league, admittedly, no longer needs him. Portland, Seattle, Vancouver, Toronto, Kansas City and Philadelphia sell out regardless of his presence. But, in the end, his continued commitment is a major win for the league to continue growing all the way until the 20th team is unveiled in New York.

Thank you, David, for helping us grow the league and the sport in this country.
Posted by R. Mera Velásquez at 1:26 PM

I've seen players on a foosball table less stationary than Beckham. They should carry him to free kicks upon a palanquin.