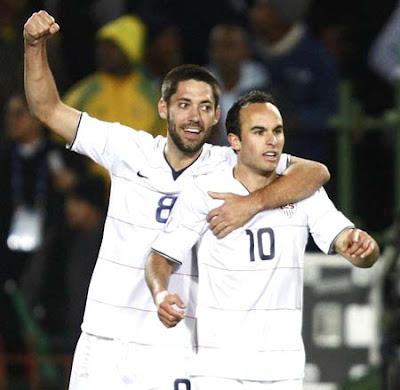 There are two aces in American soccer at the moment: Clint Dempsey and Landon Donovan. Both are at the pinnacle of their careers. Both have great goal-scoring track records, both in quantity and on momentous occasions. So can we really say one is better than the other? Yes and no.

Yes, Landon Donovan has far more international goals than Clint Dempsey. He is the leading all-time scorer for the US national team with 46 goals. He has also scored in two separate World Cups (2002 and 2010), amassing a 5-goal total in 3 cups.

Donovan has also been stellar with MLS sides San Jose Earthquakes (2 titles) and LA Galaxy (2 titles). His forays abroad, however, did not work out as many in the American soccer media had hoped. His time with Bayern Leverkusen of the German Bundesliga was limited and he showed very little with Bayern Munich during a loan spell in 2009.

By contrast, Clint Dempsey has been successful abroad with 39 goals for English Premier League side Fulham since he joined in 2007. This is the highest total goals scored by any American in the Premier League. He surpassed Brian McBride earlier this month. Dempsey was also instrumental for the New England Revolution, helping it reach the MLS Cup final twice.

Dempsey has had an important influence with the US national team. He has scored 24 goals and helped the US with several key moments including the third goal in the American's win versus Egypt at the 2009 Confederations Cup that sealed the team's improbable run to the semifinal. At the semifinal itself Dempsey scored the insurance goal in the 2-0 win versus reigning European Champions Spain. Another magical moment was the long-range shot that Rob Green fumbled into goal in the opening group match that pitted the United States versus England. This proved instrumental since the tie versus the English side would eventually lead to the Americans winning the group.

Recently, storied American goalkeeper Brad Friedel commented about the Donovan vs Dempsey comparison and argued that Dempsey was a better player because of his success abroad. To his credit, there is a point to be made here: Dempsey has stayed in Europe and has been successful. Donovan, on the other hand, has only managed loans abroad after his failed stint as a youngster with Bayern Leverkusen.

But wait a second. What about Donovan's loan to Everton in 2010? It was a major success, as the American provided important assists and scored two goals in only 10 games. He is now headed back there for another two months during a short loan from parent club LA Galaxy. A permanent move is all but ruled out due to Landon's considerable asking price, but David Moyes has asserted that he would try to enable a move if the American ace were to inquire about a permanent transfer.

So, to Friedel's credited apology, there is much to be seen still in this friendly competition between our two midfielder/forwards. Donovan is at a point in his career where going abroad is no longer necessary to "prove himself." He is already an American soccer superstar and one of the only few names synonymous with the sport in this country, mainly thanks to his clutch goal versus Algeria in last year's World Cup. Donovan is in a good place with MLS and can remain competitive for years to come without needing to step into other leagues to be considered for the national team. Dempsey, on the other hand, is quite content abroad and his life and game has profited from it.

Is it really fair to compare our more important soccer stars? Not really. Both have taken different paths to stardom. Both are versatile attacking players that can change the fate of a game at any given moment. Dempsey and Donovan can both slide into the forward position if required by their teams and both are extremely creative players. So let's step back and enjoy them for what they are: our American Soccer Superstars.
Posted by R. Mera Velásquez at 11:53 AM