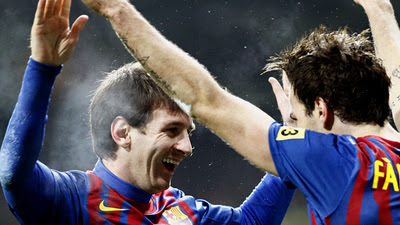 At the 1st minute in today's Clasico one may have thought that Barcelona's dynasty was finally over. Benzema scored out of the locker room and Mourinho reveled in what would be a game-changing result. But as the match wore on, the resilience of Guardiola's squad slowly weathered away Real Madrid's defense. Alexis Sanchez scored and the floodgates opened.

So what really happened in today's game? Is Madrid really still not good enough? Is Barcelona just too much for the world? A quick look at recent results shows that yes, Barcelona has hit a bit of a rough patch, but they still have only lost once. Madrid has not lost two. And at 37 points tied on top of the Spanish Primera, there is still plenty to be said this season. Note that Madrid has a game in hand, but today's result is truly game-changing: no real change, that is.

Where Real Madrid has built a team around superstars Ronaldo, Ozil and Di Maria, Barcelona spreads the wealth by including newly-acquired Fabregas and Sanchez. No Villa or Pedro on the pitch? No problem. The former both bagged important goals to reiterate why Barcelona is still the best.

Mourinho tried too much offense today. Benzema, Ozil, Ronaldo and Di Maria crowded the offensive side and passes lacked clarity and individual plays went nowhere. Higuain and Kaka only served the same purpose. The defensive midfield also put too much stock going forward. This opened the flanks for Dani Alves and the go-ahead and game-sealing goals were conceded.

How does one beat Barcelona then? Midfield and defense. Crowding Messi and Iniesta can work wonders since it breaks up the "tiki taka" that makes Guradiola's squad so fun to watch. Pressure on Xavi means Busquets has to take the initiative on his own and his passing, although quite good, isn't as evolved as the rest of his midfield team mates. After this, the forwards are left without continuous service and the attack winds down.

So can Madrid accomplish this? Yes. Diarra and Xabi Alonso are perfectly capable players. Sergio Ramos, Pepe and Marcelo can all work wonders. It should be about keeping Ronaldo and Ozil from over-thinking and allowing Di Maria to exploit the spaces. Benzema and Higuain are best when paired together and today Higuain still looked like a player in recovery.

It was a fun match to watch. Keep in mind that both teams are still in the hunt for the Champions League and both have had their chances increase after the Manchester teams crashed out. This is why we love this sport, right?
Posted by R. Mera Velásquez at 6:42 PM