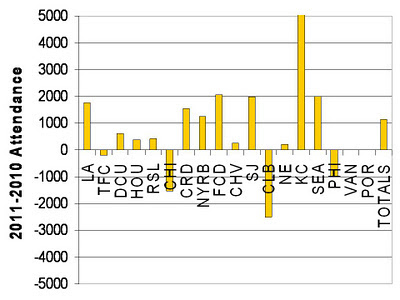 Seven teams gained over 1000 seats and 4 approached or surpassed the 2000 seat mark. Kansas City had specific gains due to the opening of Livestrong Sporting Park. New York, LA and Colorado made significant gains since last year. Seattle gained close to 2000 seats due to the New York game and Keller's goodbye match.

The negatives this year included Columbus (-2520 since 2010), Chicago (-1541) and Toronto (-187, although this is negligible). This may be due to the lack of important stars and results for the teams and good DP signings or homegrown stars may ameliorate the numbers in 2012.
Posted by R. Mera Velásquez at 7:31 PM