Omar Gonzales and the Klinsmann snubs 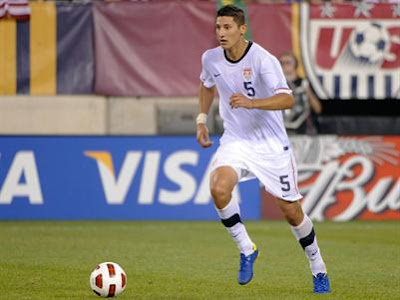 The US national team will be playing against world-class France and up-and-coming Slovenia in Europe during next week's international dates. With much of MLS at a standstill due to the start of the post-season and the mandatory breaks for all clubs world wide, this could be a great occasion to shake things up a bit more with the national side. Klinsmann says yes and no.

Yes, says Klinsmann, because Fabian Johnson will have the chance to play for the USA and because Alfredo Morales (Hertha Berlin) gets his first shot. Klinsmann's German connection continues with Timmy Chandler, Daniel Williams and Jermaine Jones all on the roster and all with equal chances at playing in the friendlies.

Klinsmann also continues with his "Latin" connection. If you count Morales, that would be one. Out of his predilection for Mexican Primera folks only Michael Orozco Fiscal is left. Edgar Castillo has clearly seen his stock whither after less-than-average performances. Jose Francisco Torres saw his season end due to injury and will not return to the fold until 2012. Klinsmann asserts that he wants a possession-oriented, Latin-influenced squad. It sure seems more German-influenced to most fans and soccer media alike.

Klinsmann also prefers not to shake up the core of the national team. Okay, a good philosophy. But consider that Omar Gonzalez is the top domestic-based defender in the US pool and that a close second is George John. Neither has been invited by Klinsmann. Gonzalez had his shot with Bradley and it didn't pan out. Klinsmann chose struggling Ream over him several times already. A head-scratcher for sure. This is particularly interesting since George John is being courted by more than one English Premier League team.

One thing is abundantly clear. This is Klinsmann's team and no one will pick his men for him. No matter how much Gonzalez, John, and Herculez Gomez may yell, it still boils down to Klinsmann's plans. Never mind that Gomez (latin connection?) is literaly "tearing it up" in the Mexican league with multiple goals for Tecos this season. But we have yet to see the final product: the dominant possession-based team that gets results. Klinsmann is 1-3-1 so far and the fans are getting restless.
Posted by R. Mera Velásquez at 12:31 AM