No Racism in Soccer 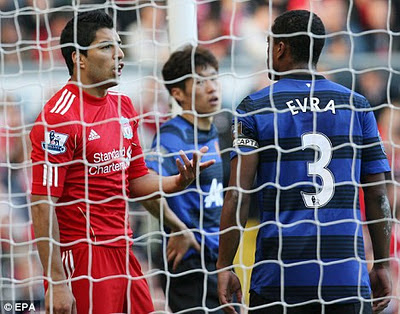 There is a disease in this world more harmful to mankind than any other: prejudice. To this day, its ugly roots tend to go unchecked no matter who our president is or who our idols are. It touches us as nasty afterthoughts and cold stares. And it makes its way into football as well.

A month or so ago, the president of FIFA, Sepp Blatter, argued that racism wasn't a factor in football. Whatever was said on the pitch should remain on the pitch and be between players and that was it. Really? I don't think that's the case when Mario Balotelli gets bananas thrown at him in Italy or when Oguchi Onyewu is insulted by players from a different squad, or even when Anton Ferdinand (brother of Rio Ferdinand) is verbally abused by fellow England national team defender John Terry. No, Mr Blatter, there is a serious, unnecessary situation here.

Couple all of the above with the obvious lack of any coaches of African descent in any of the Premier League teams. And then there is the recent altercation between Liverpool's Uruguayan ace Luis Suarez and Manchester United's iconic defender Patrice Evra. Suarez made racist remarks during a marquee match. Evra wasn't pleased and brought it to the FA.

So there you have it. It's distracting, it's a problem and it should be dealt with. You don't hear much about this sort of thing in other sports, at least none as prominent as what has been happening in soccer during the past couple of years. Let's not forget that an incendiary comment by Materazzi caused Zinedine Zidane to flare with emotion and head butt himself out of the final of 2006 and close the chapter for a talented French team that deserved better. Zidane should have known better but certain comments should not be allowed if they interfere with a person's integrity.

We are all guilty of prejudice at one point or another. But we are all capable of restraint even in the most dire of circumstances. It's what separates humans from other animals. Our cerebral cortex is made and meant to supersede instincts that can be detrimental. This isn't meant to be a rant. It's just a reminder that we are capable of more, especially for a game that we love so much.
Posted by R. Mera Velásquez at 1:40 AM

I find it incredible to believe Suarez and Terry would be so dumb as to make rascist comments. Last time I saw Chelsea and Liverpool play they seemed to have a few black players of their own - besides the sheer ignorance they have shown, what a way to alienate their teammates.