USA Women vs Canada in Portland: the live experience 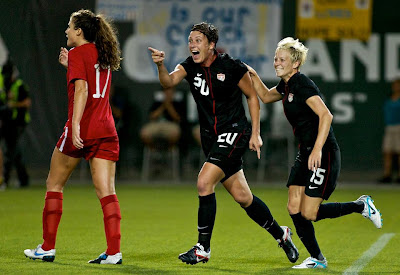 The US Women's national team defeated Canada by the score of 3 - 0 tonight at Jeld-Wen field in Portland, Oregon. It was a different kind of game from others I have attended throughout my career as a soccer fan. Young girls--the future of our USA team--giggled and cheered for their heroes before, during and after the match. Never mind that. It was fitting, perhaps, that I decided to take my pregnant wife to a family game like this.

On the pitch was a slightly different story. There was grit from Wambach and Rapinoe, calmness from Shannon Boxx, assurance in goal from Hope Solo, and a bit of spark in Lauren Cheney and Alex Morgan. We are only a scarce two months removed from the heartbreak loss to Japan in the Women's World Cup final, through penalties no less. But you wouldn't know if from the way the ladies played tonight.

The passes that were served to Wambach and Rapinoe were almost instinctual. Some of the long balls had swerve through kicking with the inside and outside of the boot. It was a bit of fantasy without the unnecessary dancing of the Brazilian national team. Canada's defense held their fort well throughout the first half. Their goalkeeper performed heroics time and time again. They are a disciplined side that will be tough to beat when Olympic qualifiers are underway in Vancouver next year. 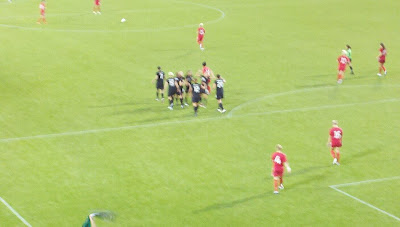 But Abby Wambach would not be held back for long. At minute 64 in the second half, Wambach scored after receiving a pass from O'Hara. The shot came from near the edge of the penalty box with her favorite left foot. A mid-air curve and into the top 90 to the goalkeeper's right. It was almost in slow motion but I, along with all the fans, knew it would go in. The second goal was typical Wambach with a diving header from another pass--this time a sweet center--from O'Hara.

The night would not be done without giving credit to the future of the US Women's National Team: Alex Morgan. The 22-year old scored in typical pure-forward mode: an opportunistic tap-in. She was in the right place at the right time, the way true goal-scorers are, and she finished the game for the Americans in a true "goleada" fashion: tres a cero.

Tonight was about the fans and the ladies, sport and dreams, cleanliness and sportsmanship. One tweeter put it nicely: "Womens soccer is so well played. No flopping, no nasty fouls/tackles. I love watching it." Indeed. Long live the game. Team USA will always win our hearts.

No flopping? Does Italy not have a team? Glad to be back and able to read the blog regularly again. Cheers, Robert.