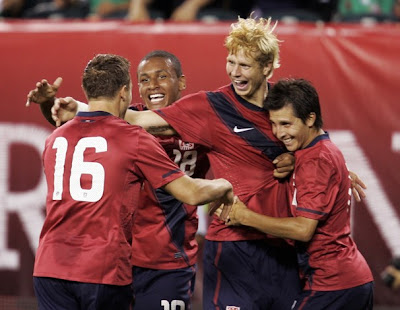 Much has been made of Klinsmann's new roster preferences for the US national team. From choosing individuals from Latin-American backgrounds (Torres, Castillo, Orozco Fiscal) to calling on other youngsters like Robbie Rogers and Brek Shea. When Klinsmann's Germany team took the stage at the 2006 World Cup the team was largely based on players under 23. Joachim Loew's squad in 2010 was also quite young. Will the same happen when USA takes the field in 2014?

There are pitfalls and promises when choosing younger players. But it's also true that generational shifts are nearly always positive. The 2002 and 2010 USA teams included a good mix of players in their prime, young stars and a few experienced stalwarts. For 2010 there was Donovan and Dempsey in the prime late 20s, a younger attacking contingent (Altidore, Findley), and some experienced defenders (Bocanegra, Cherundolo, DeMerrit). Other individuals like Torres, Bradley, Edu and Holden were in their mid-20s.

We need look no further than the 1998 and 2006 USA teams to realize how detrimental it is to have mostly older players in a squad. Same was true for Italy, France and Australia in 2010. Also noteworthy is the fact that new head coaches tend to bring in different individuals with new material to work with. Brek Shea is an explosive midfielder with exceptional talent. Agudelo is an up-and-coming striker. Timmy Chandler (assuming he remains a US player) is the future of the right back position for Team USA.

But who would survive a generational shift under Klinsmann? The German head coach is no stranger to upsetting the establishment and shaking up rosters. Would Bocanegra and Clarence Goodson be sacrificed? Are Hercules Gomez and Edson Buddle out of the national team for good? As far as deserved survivors, I think we have to count on Donovan and Dempsey remaining with the squad. They have too much talent to be left behind. The back line, however, is a different picture. Cherundolo could be the only survivor. Then again, Bocanegra, Mr Captain America, could well remain in central defense. Aside from these four players and Tim Howard, anyone else is probably, likely, to be out.

Klinsmann's 2010 holdovers are also likely to include Holden, Edu, Altidore and Bradley as players in their prime. From there the shake-up will possibly bring 15 new players, if not more, in 2014. Plenty to look forward to as qualifiers get underway in June 2011.
Posted by R. Mera Velásquez at 11:29 AM