MLS wins in Mexico without a meaning 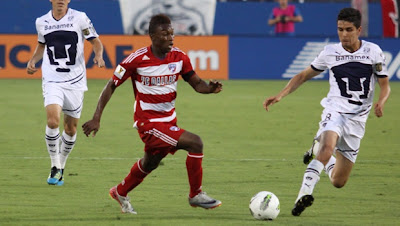 Odd title perhaps. Then again so is the situation at field level. Last month, FC Dallas and Seattle Sounders FC managed historical first-time wins on Mexican soil against Pumas and Monterrey, respectively, at the 2011/2012 Concacaf Champions League. But are those wins meaningful if you can't equal the feat on home soil?

For Dallas this happened tonight as they saw their potential lead in their Champions League group disappear with a loss at home. The 1-0 win in Mexico was erased by a 2-0 loss to Pumas at home. So, all things being equal, they came out losing by a -1 goal differential. So was history really truly made? Cosmetically, perhaps. But point for point it's really not that meaningful. Had Dallas won tonight's game, it local supremacy would have been more evident.

This doesn't just go for Dallas. Seattle could have made history last night by winning their game, at home, versus relative-minnow Herediano of Costa Rica. Herediano had been outscored 9-1 until they defeated a slightly short-handed Sounders team by 1-0. Again, win at home or at least tie in order to have the away game be meaningful.

For LA Galaxy, winning their game at home versus Morelia will be as much of a statement as their controversial loss on Mexican soil. If Colorado can win abroad then they will have erased their terrible result at home.

These days it is clear that teams must not present "B" or "C" squads in continental games. One could argue that this is why Dallas and the Sounders were able to win in Mexico. It is also true that there is nothing wrong with fielding a defensive team when trying to protect a lead. Just something for MLS to ruminate on.
Posted by R. Mera Velásquez at 10:10 PM