Sportsmanship: a short letter to US fans 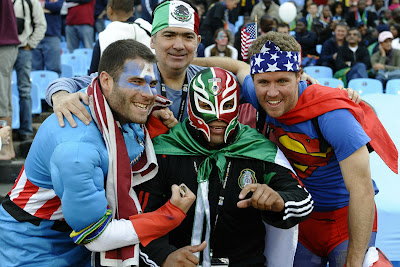 Anger and disillusionment are natural human emotions. It doesn't matter if you're El Salvador losing to Panama, Holland losing to Spain or US losing to Mexico. We call for the heads of our coaches, question the benching of players, remark about the loss of form of individuals or the phantom calls by referees. But we should not resort to violence, not physical nor verbal.

The most recent emotional event for US soccer fans was the loss of Team USA to Mexico at the Gold Cup final. Fans and critics were irate and suggested Bradley should be deposed as coach. But in the stands there was verbal violence of Mexican fans to Americans and vice versa. And players too. Landon Donovan refused to comment on Bob Bradley's status and also expressed his disillusionment for being benched for the start of two Gold Cup matches. Tim Howard, star goalkeeper for the US, was quoted saying:

“CONCACAF should be ashamed of themselves. I think it’s a (freaking) disgrace that the entire post-match ceremony was in Spanish. You can bet your ass if we were in Mexico City it wouldn’t be all in English.” His apology followed: “I am the father of young children, and I certainly do not believe profanity is appropriate in public comments. I was caught up in the heat of the moment.”

Caught up in the moment indeed. We all do it. Apology accepted. He didn't have the best of nights and he knew it. However, I'm in agreement with the fact that the ceremony should be held in the languages of both participating teams. Where's our FIFA fair play? Howard also said in his apology statement that he stood by his words about the language used at the Gold Cup ceremony.

Reading fans comments in several soccer blogs I found silly language and unfortunate prejudice. And yet, through it all, I reminded them that this country is unique. For some of us, when two national teams play it might just be the case that you will find no qualms with either team losing. You might be cheering for the country you love for a moment and the country you were born in a minute later. There was an image that struck me before the match started: a fan wearing a green Mexico jersey holding his right hand on his heart as he sang the Star Spangled Banner.