The B side: US loses to Spain 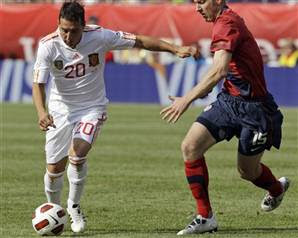 The United States lost by the score of 4-0 today against Spain without some of its key starters. Is a game worth playing when you know you know you're not putting in 100%? Bob Bradley and US Soccer sure think so. Yes, it's Spain and it's the cash from playing against the world champions. Yes, it's a "tune-up" match before a big tournament. Really?

Today was a sad day for US soccer fans and the players themselves. They went out there to try to not get injured, to stay away from tackling too hard, to not outrun your own pace. How is this a warm-up? And no big stars from the start of the game? Donovan (illness), Bornstein (injury), Bocanegra (resting). Yes, we get it. But no Bradley, Cherundolo or Dempsey? That's 5 top players and not much cohesion in the midfield or defense.

This game would have been better played against a more modest team like New Zealand. Mexico had the right idea. They played earlier in the week and versus a smaller team. You can't go against the best team in the world with only your bench players or new guys. It's just math.

Who was at fault here? Everyone and no one. It's not Bob Bradley's fault that they were playing against the best in the world in a meaningless friendly three days before the start of a major tournament. Why would you risk losing the tournament only for a single game? And if we want to blame US Soccer then we have to realize that the revenue from this game alone plus the exposure is important for the growth of the federation. And the players? Howard can't do it all himself and the rest are trying to stay healthy for the tournament while at the same time trying to impress the coach enough to get picked as starters in the Gold Cup.

Only Spain won today. Not the fans nor the team nor the federation. The USA still lacks the depth required to play high-level matches without the main starters. This is true for games like today's and for tournaments like the Copa America or the second Gold Cup (which excludes passage to the Confederations Cup). Aside from trying to understand the logic behind the 2-year Gold Cup cycle, which is more due to Concacaf, is the sobering reality that our second and third-tier players are still a few years away from top competition. Also, in the end, your "B" team isn't going to win against most "A" teams. If you need further proof then just look at Argentina's recent multi-goal loss to Nigeria.

No ratings today for the sake of brevity.
Posted by R. Mera Velásquez at 10:28 PM