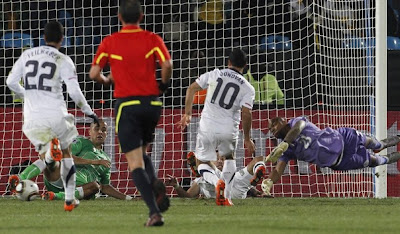 Photo credit: FIFA
Tears of joy. Plain and simple. This was the emotion felt as Landon Donovan scored the goal that clinched the group in World Cup 2010 and sent the Americans back to the round of 16. You could hear it from Miami to Seattle, Los Angeles to Boston, San Fransisco to Washington, Denver, Kansas City, Chicago, and all points in between. The American soccer nation held its breath for 92 minutes and was awarded with a Hollywood ending.
I was reminded of this occurrence as I read a new post in Ives Galarcep's soccer blog, which asked the question: where were you during that game and that goal?

It was an interesting time in my life. I was scarcely over two months away from finishing my degree and moving to the state of Oregon for the next phase of my life. And yet this would not stop me from watching my national team in the biggest game for the US since the 2002 quarterfinals. I had watched the US-England match in the company of friends and the US-Slovenia game with my wife. For the Algeria game I decided to visit my family. Actually, just my mother.

As I sat with my mother, we yelled at the players when their shots went high and scolded the refs when their calls seemed dubious. I gripped the amulet hanging from my chain and closed my eyes when Algeria attacked. And as the game wound down my sighs and visible disagreement prompted my mother to leave the room momentarily to continue making lunch.

The final play prior to Donovan's goal was enough to send a collective breath through soccer nation USA. A point blank header by an Algerian attack was promptly saved (and held) by Howard. Our star goalkeeper then quickly served the ball up to a running Donovan. Landon quickly passed to a streaking Altidore to his right. It was four on two with Dempsey and Buddle also on the prowl. A perfect driven center by Jozy came to Dempsey but the Fulham striker was too close to the goalkeeper and the ball bounced back out. Donovan picked up the lose ball and gave it a low, well-placed tap. Goal.

It was pure joy from that point on. I jumped out of my seat and my mother screamed "goooooooooool" with me. Half a city away, my wife watched the goal from her office and screamed in silence with fists to the sky. I almost cried. Actually, that would come a few months later when I watched the highlights of the game and of fans worldwide and nationwide.

We won't forget this moment in American soccer history no matter what the near future holds for the team. On a June 23 in 2010, the American soccer nation cried with joy in unison as Donovan's goal made us believe in fantasy again.

I'd like to thank the SBI crew for reminding me of this wondrous occasion.
Posted by R. Mera Velásquez at 10:55 PM