Mexico: Class of the Gold Cup 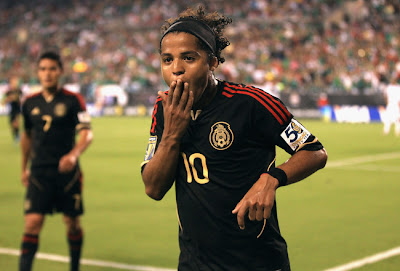 The Mexican national team currently playing at Gold Cup 2011 is quite possibly one of the finest sides this country has produced in the past decade. Its offense is by far high above all others in the region. And why not? It fields Manchester United's striker Javier "Chicharito" Hernandez, Giovanni Dos Santos (Racing Santander), Andres Guardado (Deportivo La Coruna), Efrain Juarez (Celtic) added to the likes of Carlos Salcido (Fulham) and Rafael Marquez (New York Red Bulls). If 5-0 wins versus El Salvador and Cuba were "to be expected," then the 4-1 demolishing of Costa Rica today was further proof.

Indeed, Costa Rica went looking for points in this match to perhaps qualify as top seed of the group. But the complete domination of the Aztecas, now firing on all cylinders was too much for a Central American side that came to this game after rallying back to tie El Salvador 1-1 during injury time.

Mexico is just clicking well right now. Every pass is assertive. Every shot is dangerous. Every tackle is timely. Every decision is wise. From the slick passing and possession by Slacido, to the darting runs by Guardado, Torrado and Castro, to the positioning by De Nigris and Barrera, it's just too much for Concacaf competition. Chicharito is the star of the tournament and of the region. His headers unleash rebounds unreachable for goalkeepers. The same goes for his shots on target.

So, can anyone stop Mexico? Honduras, perhaps? Jamaica? The United States? Let's not forget that Mexico is essentially playing "at home" in pretty much any Gold Cup location. And this is where US Soccer might be shooting itself in the foot by continuing the silly format that is the Concacaf Gold Cup. Always in the US and always in stadiums friendly to the Mexican team. If the US is to beat Mexico--if they reach that far--they will require ideas that are nonexistent in Bob Bradley's playbook or in our starting defense.

This is likely to be a Mexican Gold Cup. And deservedly so. The team has the style, the technique, the crowd, and the passion behind it at the moment.
Posted by R. Mera Velásquez at 12:32 AM