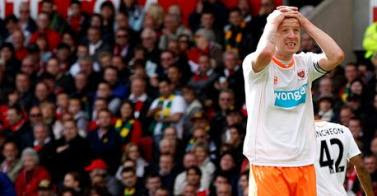 Photo Credit: Yahoo
What a Sunday. In the course of two hours, five teams faced relegation from soccer's most prestigious tournament: England's Barclay's Premier League. With West Ham out as of the past couple of weeks, two places remained remained in danger of dropping to the second-tier Championship. It would be Birmingham City, Wolverhampton Wanderers, Blackburn Rovers, Wigan Athletic and Blackpool. Three would survive.

The day started grim for Blackpool, going down on the scoreboard to Manchester United at Old Trafford (champions since last week). This put them in the drop zone along with Wigan, who was tying Stoke City at the time. Blackburn started off fast by scoring on Wolves early in the game. They would score two more goals in the first half. Wigan was tied at Stoke City. Birmingham was alive due to goal differential.

Luckily for our American compatriot Jermaine Jones, his team would not relinquish its lead and remained in England's top flight. Blackpool had the lead for precious moments at Old Trafford but Man. United returned fire and ended its championship in style by the score of 4-2. Blackpool would return to the second division. At the same time, Birmingham went down 1-0 to Tottenham but tied the match 1-1 to put them back in the Premier League. This was until Wolves scored two goals to level them in goal differential with Birmingham. They had scored more goals, however, so this meant the Blues would have to score another goal. This never occurred. Instead, Roman Pavliuchenko would score again and would win the game for the Spurs. The day ended with more heroics when Martinez's Wigan scored a winner thanks to Rodallega to keep the team in England's top flight.

For anyone that knows soccer beyond the World Cup and MLS, this is what the sport is about. Surviving is not just for making the playoffs or continuing to the final. Surviving is the necessity and requirement for any and all teams to remain in the top league. We know that a losing season is more than just a "rebuilding year" or a "better luck next year." How would it be to have minor league baseball teams attain entry into the major leagues? And weaker teams to play for their lives so they don't lost their place in the league?

In the end it is also about money. Teams in the Premier League, Serie A, La Liga, receive financial incentives and also profit from the presence of the most profitable players in the world. Smaller teams benefit from having the likes of Cristiano Ronaldo, Wayne Rooney and Robinho visit their stadiums.

No, we know the MLS won't have this capability. Not for the next 20 or so years. And other American sports? It's not in the cards. Not when even the BCS is still in place. So, for now, let's enjoy how the rest of the world plays. A fight to the finish. A fight to stay on top. Survival. To remain alive.
Posted by R. Mera Velásquez at 5:11 PM