Once in a generation: Manchester United 2011 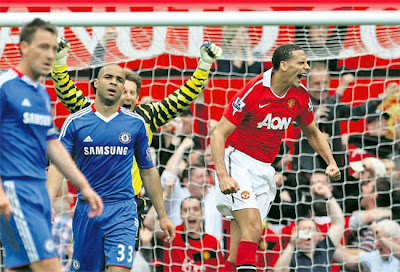 We all watched today as Manchester United all but sealed its win as Premier League champions with a 2-1 win over bitter-rivals Chelsea. They need just one point in the next two matches to formally clinch the trophy. Manchester United, as a club, isn't exactly the winningest (Real Madrid has 31 titles), nor are they supreme in the world--that has yet to be seen when they face Barcelona. What United has is a keen sense for locating and developing some of the world's best players.

Each player brings a different style to the team and they perform beautifully in concert under the tutelage of Ferguson. Other teams such as Real Madrid, Barcelona, and Arsenal also contain a wide variety of players, but recent years have shown that the Manchester squad captures a wider range of individuals that can make instant impact.

In the wake of the loss of Cristiano Ronaldo, Ferguson brought in two young stars: Antonio Valencia and Javier Hernandez. Valencia has blossomed into a fierce threat as a winger and Chicharito is, without a doubt, Mexico's best export since Hugo Sanchez. The young Mexican star was also a steal in the market (according to teammates and media). Valencia can also be considered the best Ecuador player of his generation given his track record. Add to this Rooney, Ji-Sung Park, Vidic and you already have something special.

This year will probably bring at least one more title to Manchester United: the Premier League. Barcelona is waiting to battle against them for the title of European Champion. But we can't deny that United's brilliant scouting and the love and knowledge of the game that Sir Alex Ferguson, means the team is a "once in a generation squad." Maybe not of the squad as a whole, but definitely of its players.
Posted by R. Mera Velásquez at 10:45 PM