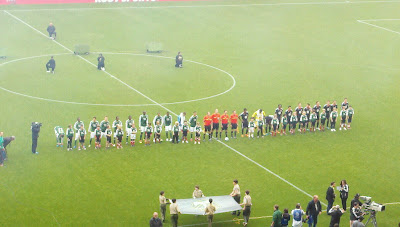 Fandom. That's the best way to describe a Portland Timbers match. The stadium, the people, the atmosphere is just amazing. Today we experienced the first Timbers game in MLS action versus a depleted, yet still consistent, DC United squad. The score was a negative 2-3 for a game that should have been a tie. But the experience is what really counts at this point in the club's early MLS career.
In terms of the game, I'd have to say that the second half was much better. DC United looked more lively in the first half and Perry Kitchen kicked off the scoring through a carefully choreographed corner (either by the DC offense or the Portland defense). Meanwhile, Portland struggled as Perlaza and Cooper lacked quality in their attempts and Jewsbury seemed absent. Can we blame this on the mid-week friendly versus storied Ajax Amsterdam? Hardly. I think the referee had more of an influence in this game.

Indeed, the second half was more entertaining, both goal-wise and on-field action. After a phantom offside call on Cooper's goal came a series of 4 penalties. Two missed, three by the Timbers and one by DCU. It was really just one PK for Portland that was repeated twice after Hamid stepped off his line (or DC players invaded the area?). We won't ever know for sure, I don't think. As for the PKs, Cooper hesitated twice and Hamid stopped it twice, regardless of whether it was legitimate. Jewsbury then stepped up the third time around and scored. A PK for DC a bit later returned the scoreline in favor of DC. Josh Wolff finished it off just 6 minutes before the end. Even though Perlaza scored again for Portland, it was too little too late. 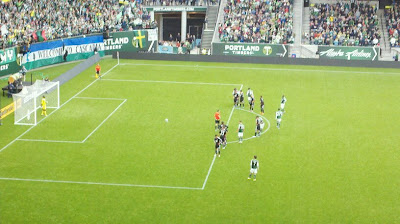 The Portland Timbers now lie at a crossroads. They have lost their first game at home and what was usually a sure 3 points on home turf now means they must reacquire points away from the Columbia Gorge. For DC, however, things are starting to click. Add to this the fact that they will have nearly their entire team (injuries aside) to work with during the Gold Cup and the top echelon of the Eastern Conference looks more accessible.

Soccer aside for a moment. Cheers to the Timbers fans. The intimacy of the stadium and the incessant chants by the Timbers Army are enough to get most fans of the sport riled up. The stadium is as beautiful as it is historic and its lower capacity makes for a better experience both inside and outside. We were back on the road driving south into the Willamette Valley after just 15 minutes.
Posted by R. Mera Velásquez at 9:26 PM