Champions of Europe: Barcelona and the Messiverse 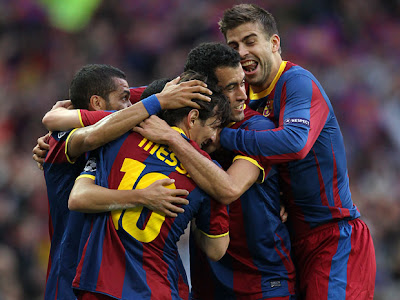 It's Messi's world. In European club soccer there is no better player. FC Barcelona prevailed over Manchester United FC at the 2011 UEFA Champions League Final thanks to its number 10. The Catalan team proved to be too much for Manchester United, robbing them of the ball and playing their futbol dance throughout the match.

This was a rematch of the 2009 final when Cristiano Ronaldo faced off against Messi for world dominance. That match would end 2-0. Today's 3-1 is the same general score. Dominance and distance. The game started much like the 2009 final: possession, aggression and a resolve to keep the ball away from Messi, Xavi and Iniesta. Vidic, Evra, Valencia and Park constantly broke up plays by the spaniards well inside the Iberian half of the field. And just like in 2009, as the 10th minute came around, Barcelona stole the ball. They would never give it back except for Rooney's goal.

The victory was complete because the three attacking aces scored for Barca: Pedro, Messi and Villa. Pedro's strike was magic on the pitch after subtle passes gave way to a final touch worthy of replays. Rooney would strike back seven minutes later. But that would be all from United. The second half started with a more balanced and composed Manchester United. Until Messi found a goal through a rare Van der Saar error. Villa's strike with a curling ball to the upper 90 was further prove of his completeness as a striker.

There was distance between the two teams because Barcelona found channels through the English defense with short passes and midfield incursions. The Catalan team opened up the usually-stout group that Ferguson developed from some of the best defenders in the world: Ferdinand, Evra, Vidic, Fabio. There was distance also in the score: two goals. No way for United to return fire when Villa was subbed off at the 85th minute. The game stats said it all: 24 shots, 70% possession.

And even though this is the Messiverse, no one player is complete without his team. And this supporting cast happens to be the best in the world--quite literally. Indeed, if Villa, Pedro, Busquets, Xavi, Iniesta, Pique and Puyol sound familiar it's because they form the spine of the World Cup Champion: Spain. Not to mention that 7 of these players came up through the Barca ranks. This is the difference: a team built from the ground up, growing together and adding the best player in the world.

Congratulations, Barcelona. And thank you for making us believe in fantasy again.
Posted by R. Mera Velásquez at 5:25 PM