No soccer channel for MLS 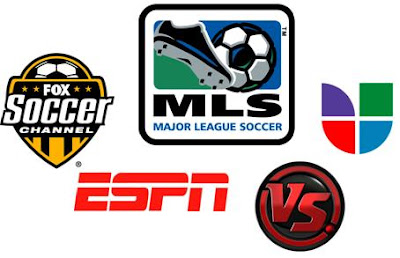 That's Fox Soccer Channel, or FSC. Reportedly, MLS is asking for $20 million from FSC for broadcasting rights. It's a seven-fold increase of the current contract of $3 million. At the moment, ESPN pays $8.5 million, with Univision as the Spanish language outlet for the domestic league. Is this a realistic request by MLS?

I'm no economist, but let's face a few facts: MLS isn't topping many ratings. The average number of televisions tuned to FSC games is 53,000, usually on Saturdays. Compare that with the much more highly rated Barclay's Premier League and the UEFA Champions League. Meanwhile, ESPN has a 200,000+ average viewing of MLS prime time matches. Now, I'm not saying that FSC should drop the league altogether or switch to the Fox Sports World theme (Fox Soccer Plus already does this). All I'm saying is that MLS should stick with what it has with FSC and, maybe, just adjust for inflation.

The ultimate losers for the falling out between MLS and FSC are the fans. Even if the ratings are paltry in comparison to games in other networks or other leagues in FSC, having the games on national television is hugely important. What happens when the soccer-specific channel in the United States won't even show the domestic league? Doesn't it make the league and US soccer look silly? How is the MLS supposed to be a more competitive league when less games are on TV? Does the league lose respect? players? fans?

This is an important moment for the sport in this nation. US soccer is coming out of an impressive World Cup and American players are increasingly better regarded by top leagues. The soccer nation continues to build its fan base in this country. Switching to other leagues during the prime time hours during the weekend (Mexico, Brazil, Argentina) only signifies loss of respect for the domestic league. And it means less fans even as MLS expands into the Pacific Northwest, Canada, and possibly by adding a second team in New York.

This is a disappointing turn of events, yes. But there is still another month before the start of MLS 2011. Hopefully we will see Charlie Davies scoring on FSC this year when other networks are unable to carry the game. It's worth it, MLS.
Posted by R. Mera Velásquez at 6:31 PM

Well argued Robert, sounds like MLS is going to shoot itself in the foot here.

Glad to announce that the partnership has been extended for another year. http://www.mlssoccer.com/news/article/mls-fox-extend-national-broadcast-rights-agreement