Next Generation: US ties Chile 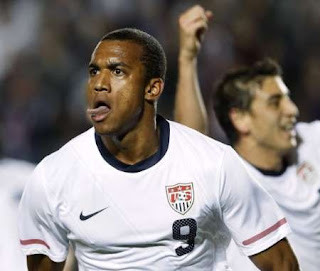 It was the first game in the new World Cup cycle for the United States and the stars and stripes managed a 1-1 tie versus a reserve Chilean side. But that's okay. The US team was also made up of mostly reserves: MLS and Scandinavian-based players. It was another chance to watch Shea, Diskerud, McCarty, Bedoya in the midfield and another chance to look at the possible future of the US attack in Agudelo and Bunbury. It was a fun game to watch and also a great way to meet the young lads.

Back in December, a similar group of players confronted the Bafana Bafana in South Africa for the Nelson Mandela Cup. The game was also fun to watch and it ended on a positive note: a great play by Diskerud and Agudelo that ended with the 17-year-old scoring in his first international game. The Chile game in Los Angeles provided more glimpses of Diskerud in action. He was clearly one of the top players on the pitch. McCarty was probably the best for the US and Bedoya had a slow start but got better as the game went along.

The defense was a bit of a let-down. Yes, Ream and Gonzales paired up well and Lloyd and Franklin were able to join the attack in the first half. Unfortunately, Marvell "la Maravilla" Wynne had tense moments and questionable judgment that created Chile's opening goal. He will need to work on his decision-making if he is to remain a viable option for the US. Rimando performed well at the goalkeeper position but his age and place in the pecking order at the moment does not make him a top 'keeper for the US. Sean Johnson didn't do much in the second half and the goal wasn't his fault. We hope to see more of him in Chicago. Still early, but he has the tools to succeed.

Bradley started the match with a 4-2-3-1 formation reminiscent of the setup for matches post-World Cup. It wasn't the 4-3-2-1 from the Edu-Bradley-Jones mess but it was a way to leave a lone striker with support from attacking midfielders. Brek Shea had some good moments but his first touch was still lacking. Putting Wondolowski up top (top MLS scorer in 2010) was an interesting move, but the San Jose lad never played the lone striker role so his actions were muted by this handicap. Diskerud and McCarty found him a couple of times but he needed a partner.

Enter Agudelo and Bunbury. You could tell these two were hungry for action as soon as they hit the pitch. That the US was trailing 0-1 on the scoreboard only added to their actions. Bedoya found them constantly along with Diskerud and they created important chances. It was Bunbury's speed and Agudelo's ability to run at the defense that allowed for the Americans to tie the game. It was Agudelo, in fact, that created the play that drew the foul for Bunbury's tying penalty. It was easy to see that Agudelo wanted to take the PK himself. The Telefutura guys were claiming "barrio style" when Bunbury took the ball from Agudelo to take the penalty.

It is the amateur decisions at this point that may have cost the US a possible win. Marvell Wynne's faults in the back and overeager playing by Shea and the strikers are merely symptoms of limited international experience. I still believe that Agudelo is an exciting player in the mold of Jozy Altidore and that Bunbury may be the new Charlie Davies. As far as the midfield, Bedoya, Diskerud and McCarty are only further deepening this position. In the back, the Gonzales-Ream tandem has the possibility of becoming the Bocanegra-Onyewu of the future. The lateral players are still up for grabs, however, but Sean Franklin has shown he has the tools to perform at right back.