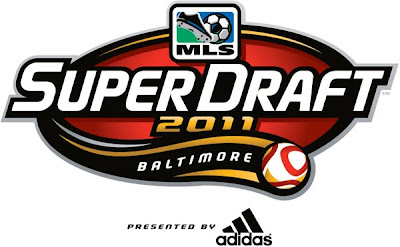 College drafts are as American as apple pie. They occur in every American sport and help to keep leagues competitive and level, or at least it is intended to do so. MLS is no different. The league has held a draft since its inception. Indeed, Brian McBride was the top pick in the Inaugural Draft. These days, however, the draft includes much more than college graduates; it is also comprised of international players, undergraduates and USA youth squads.

This blog entry is not meant to talk about the actual results. For that, it's easier to read analysis on the MLS website and other outlets. Instead, I'd like to acknowledge the increasing amount of attention given to the draft this year, to its players, and to the league as a whole. The first round was broadcast live on ESPN2 and ESPN3.com and the third and second rounds were shown on the leagues website. For ESPN, former MLSers and color commentators Alexi Lalas, John Harkes and Taylor Twellman provided interesting analysis and great arguments. 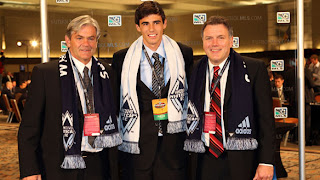 Online, beyond the coverage on espn3, twitter and Facebook were both lit up with MLS draft coverage. Twitter, in particular, had Omar Salgado as a trending topic when the Whitecaps surprisingly chose him as the first pick. He's a U-20 US international that switched allegiances from Mexico (after being in their U-17 squad) and Chivas Guadalajara to join MLS. We will follow his career with great interest.

Technology allowed me to follow the draft via smartphone and, subsequently, through the Internet (thanks, .edu domain!). I also must acknowledge that I was never appreciative of the draft itself, being more exposed to European and Latin American futbol. But, in a country and league that lacks promotion/relegation, it's the next best thing--and it may be growing on me. There was certainly intrigue involved today, last minute trades between teams, great fans present in Baltimore and more proof that this league matters.

As for the top picks, aside from Salgado's surprise #1, is Akron's five players in the first round, Perry Kitchen's DCU destination and New York's move for John Rooney (yes, that Rooney's brother). DC United, in particular, have built up quite a midfield through trades and player academies. In 2011, they will have Najar, McCarty and Perry Kitchen. Something tells me they won't be allowing as many goals this time around. Portland and Vancouver should be fun to watch also. Portland may be getting Kenny Cooper, in addition to draftee Nagbe. The Whitecaps now have Jay DeMerrit and Omar Salgado, the old guard and the new guard of US Soccer. Bring it on, MLS 2011!
Posted by R. Mera Velásquez at 10:25 PM

Nice win in Jermaine Jones debut today plus goals by Dempsey (2) and Spector, good weekend for the Americans in the EPL.