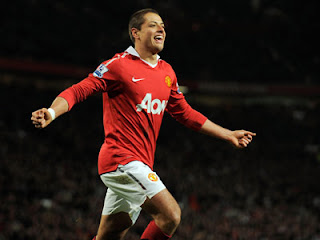 It was an interesting conversation on twitterworld today: why doesn't the US have a Chicharito (Javier Hernandez). Someone that scores for a big-name team (Manchester United). Someone that scores for the national team (11 goals in 20 appearances). Someone that has done these things by age 22. This conversation came out of an impressive goal that opened the scoreboard for Manchester United in Premier League play today and was followed, nearly simultaneously, by Mexico-hating and Altidore-hating and the depreciation of US Soccer.
But is this truly the case? US soccer journalists argued that Altidore, for example, is someone that made the jump to Europe at a very early age to one of the more successful teams in the Spanish Primera. "Jozy" Altidore set up two of the more significant goals for the USA at the World Cup (passes to Bradley versus Slovenia and Donovan (versus Algeria). He scored once in his inaugural season for Villarreal and was subsequently loaned (without playing) to Xerez (spring 2009) and then to Hull City of the Premier League for the 2009-2010 season. There, Altidore scored twice in Cup competition and once in league play. Keep in mind that Hull City was relegated the same season and that were limited in scoring opportunities. Also, at Villarreal, Altidore has to contend with Borja Valero, Rossi, Nilmar, and Jefferson Montero. He will nearly always be on the bench when paired against Rossi and Nilmar. For Chicharito, the main contenders are Berbatov, Rooney, Owen and Macheda. Owen and Rooney have been injured quite often this season and Macheda isn't as experienced as Chicharito. Hence the increased playing time. Also, Rooney can double as an attacking midfielder in a 4-3-1-2 scheme or as a center forward in a 4-3-3 scheme. 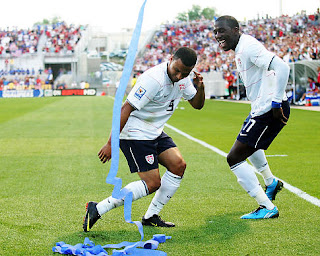 But this wasn't only a comparison against Altidore, it was a comparison against the US development of strikers. Young forwards such as Kenny Cooper, Eddie Johnson, Charlie Davies, Freddy Adu haven't made a good impression in Europe or have seen their careers derailed by injuries (Cooper, Davies). Can we fault them for that?

Then there's the standout stars that often score but are not taken into consideration when Chicharito Hernandez scores: Landon Donovan and Clint Dempsey. Donovan is on vacation but he's a prolific goal-scorer internationally (record-holder, possibly unbeatable in the foreseeable future) and in Europe (with Everton). Dempsey scored a goal today just a half hour or so after Hernandez' tally. "Deuce" Dempsey is likely to see a move out of Cottage Craven at this point and only the sky is the limit. Oh, and the ascent of Stuart Holden with Bolton is also impressive (2 goals this season and a Premier League best 11 of the fall 2010). Not a forward, but a goal-scorer and playmaker making a difference in the top league in the world. 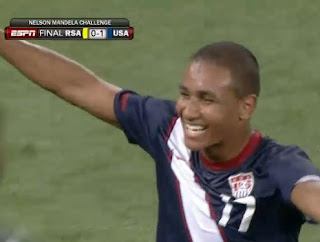 So here's the point: Javier "Chicharito" Hernandez is an incredible player with impressive talent, but the US has experienced goal-scorers and young lads like Altidore (contender for a starting position in La Liga) and Agudelo (impressive performance with the Red Bulls and scoring in his first national team appearance). It will be USA vs Chicharito at the Gold Cup this summer and it's too early to come to conclusions.
Posted by R. Mera Velásquez at 5:40 PM

Not exactly on the subject, but I found while in Costa Rica what a good idea it is to wear a soccer jersey - it was a conversation starter and a way to meet new people from all over. I wish we could have more fans in the US. I'm living proof you can like more than one type of football (and you are too of course).

Developing forwards is a tough thing for almost all countries(not looking your way brazil). Mexico is set to reap the benefits of Chicharito, but it has had its shares of flops and unrealized potential (at least so far.. vela, dos santos). Its all about growing the pool of prospects and finding the diamond in the rough