The second year expansion team, Seattle Sounders FC, defeated the Columbus Crew in the Lamar Hunt US Open Cup tournament and won it for the second year in a row. For those unfamiliar with this tournament, it is akin to the English League and FA Cup tournaments, the Copa del Rey in Spain, and many other single-elimination tournaments in planet football. Yes, USA has one too, and they've had it for 97 years.

Just like in other countries, this tournament is open to almost all semi-pro and professional leagues within the country, including the USSF Division 2 (Carolina Railhawks, Miami FC, etc.), USL-2 (Crystal Palace Baltimore, Austin Aztex, etc.) and other minor leagues. Like in England when Wycombe Wanderers may upset Arsenal or Everton, a team like the Charleston Battery may defeat the LA Galaxy.

Ever since the formation of MLS, and with the exception of the Rochester Rhinos in 1999, only MLS teams have won the cup. Attendance for these matches is notoriously low because they (a) fall during midweek usually, and (b) media coverage is limited. The same can be said for most other cup tournaments throughout the planet with the exception, perhaps, being England.

But this year Seattle changed the tournament. It injected credibility with the media, given the significant, ardent fan base of the Emerald City. The team also includes world class stars: Blaisse Nkufo (Switzerland) and Angel Fernandez (Uruguay), both present at the World Cup. Added to this are young phenom Fredy Montero, Steve Zakuani, Kasey Keller, among others. And the Crew is no pushover: Frankie Hejduk, Guillermo Barros Schelloto, Robbie Rogers, Eddie Gaven, Emanuel Ekpo. 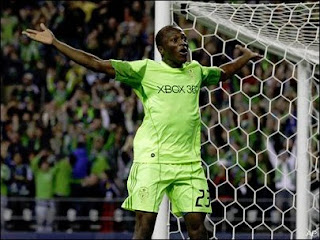 It was a fun game to watch, with plenty of action on both ends. The Crew went up first but Sanna Nyassi would even the score before the half and would add the winning tally deep into the second half. He did it in front of an emphatic 31,000+ attendees in a raucous environment worthy of the 97-year-old tournament. This is after winning it against DC United in 2009 at the RFK Stadium. Seattle is a model club worthy of praise on and off the pitch. It is a triumph for MLS and for the US fan of the sport. Well done.
Posted by R. Mera Velásquez at 12:05 AM

That next to last sentence made me feel terribly, terribly alone.