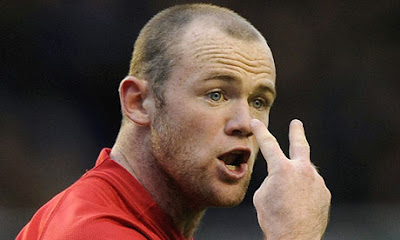 Incredible turnaround for a star in peril. I divert my attention from US Soccer to talk about more immediate international happenings. This blog entry is about Wayne Rooney. This has been a rough season for the English soccer superstar. Once the king of fantasy Premier League, the man has been relegated to the bench and/or dropped from squads completely. In life, he had a mediocre, at best, World Cup, and his EPL season has shown little of his wealth of talent.

Manchester United, undisputed kings of world soccer a few years back, has also lost its grip on the European scene. Is this due to the loss of Cristiano Ronaldo and Carlos Tevez? Is the injury to Antonio Valencia also influencing the team's performance? Sir Alex Ferguson looks nowhere near as concerned when his team ties a team like West Brom. Not the way he would have reacted in 2008, right?

So where does Rooney figure into all of this? He is/was the prodigal son of English football throughout the 2000s decade. His red card in 2006's quarterfinal versus Portugal possibly influenced the outcome of that match: Portugal win. In 2010 he failed to score and his chances were few and far between. In the 2009/2010 season, Rooney played scintillating soccer and defenses couldn't stop him. In 2010, there have been quite a few matches in which his role was reduced to a cameo appearance.

Then comes word that Rooney wants to leave Man. U., that Real Madrid and Manchester City are seeking to acquire him, that Sir Alex Ferguson concedes the player doesn't feel at home with the "Red Devils." The fans parked in front of his house and demanded answers. Is he really leaving. Is he really going to play for the "Citizens?" Wow.

But, as often happens in the world of football, a final decision was made with pen and paper. Yes, Rooney signed a new contract with Manchester United for a five-year deal. If he wants to leave it will be a high price. If he stays, he better rekindle his considerable talent. "Chicharito" Hernandez is waiting on the bench and Dimitar Berbatov isn't going anywhere. Without Ronaldo, United needs Rooney to step up to the plate and deliver as the franchise player. Nani can only do so much.

If all of this sounds familiar it's because we've seen it before, closer to home, with our own superstar: Landon Donovan. Yes, the most recognized face in US soccer history signed a multi-year contract with the Galaxy a year ago, thus foregoing opportunities overseas for MLS stardom. In retrospect it's really not a bad deal. Donovan doesn't need to strut his stuff abroad. He already showed what he can do with Everton, and certainly in international mode with the United States in South Africa during the World Cup. So, for Rooney and England, sticking with Manchester United is the best deal. England's #10 remains on home soil and United can continue to build around him. He's a good son after all.
Posted by R. Mera Velásquez at 4:28 PM