Neven Subotic and the US National Team 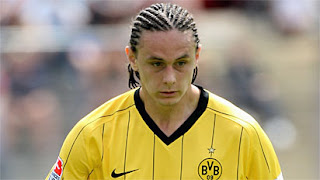 There has been much speculation regarding one Neven Subotic--an outstanding defender of Serbian roots, American citizenship and German residency--and which country he might represent in the near future as Africa 2010 slowly creeps up on us. I have alluded to this particular situation on previous entries and I still believe he would be a great asset to the United States. Just recently it was mistakenly reported that Subotic had opted to play for Serbia instead of the US or Bosnia (also eligible). This, however, was quickly retracted when Sunil Gulati, the US Soccer Federation Prez himself, issued a communique saying that USSF had spoken with Subotic's representatives and claimed such claims to be "untrue." Earlier attempts by Germany to claim him were thwarted by FIFA due to a technicality involving his status with US youth squads.
So why all the fuss? Some facts: Subotic was born in Yugoslavia, spent his childhood in Germany and his teenage years in the USA since 1999 (Utah, Florida). He attended (and represented) the University of South Florida, played for the US U-17 and was eligible although not selected for U-20. He has spent the past couple of seasons in the German Bundesliga, playing for FSV Mainz (4 goals in 34 games) and most recently for powerhouse Borussia Dortmund (5 goals in 13 games). Clearly, the US backline can use a man of his stature and nose for goal. But here's my take on this debate and I'd like to pick Subotic's brain for just a second. . .
Serbia, former Yugoslavia is clearly no Germany in world footballing terms, but then again the US isn't Yugoslavia in footballing terms either. Yugoslavia reached the semifinals in the 1930 amd 1962 World Cups and runers-up in the 1960 and 1968 UEFA Euros. Let's not forget that Croatia was also once part of the Communist Yugoslavia and their 3rd place finish in France 98 is noteworthy. Many attributed most of the former Yugoslavia deep player pool to playters such as Davor Suker (Croatia) and Savo Milosevic (born in Bosnia, played for Yugoslavia/Serbia). Confusing, heh? And it should be, because Subotic also has the posibility to represent Bosnia, although his Serb parents strongly suggest Serbia as his team.
All in all, I think it comes to this: right now both the US and Serbia have chances of advancing to World Cup 2010. The US may have it easier against foes from CONCACAF whilst Serbia is paired up with none other than mighty France and on-again off-again Romania plus the feisty Austrians. I venture to suggest that Subotic will pick a team that has already qualified or is on the verge of qualifying for FIFA's biggest date, if he follows his football greed... if he follows his heart is another matter altogether. Clearly, the man will be a starter no matter whom he plays for. As for us USA fans let's cross our fingers and hope that France and Romania get the better of Serbia (Serbia has yet to snatch points from either one). We lost Rossi to Italy even though the boy was born in Jersey and now he's scoring regularly for Villareal and will feature alongside Luca Toni in the full national squad. Hopefully this will not be the case with Subotic.
Here he is in action: