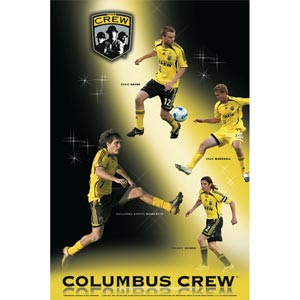 At points in this MLS season I had badmouthed the Columbus Crew fans, labeling their franchise as one that could be moved elsewhere especially given that they did away with a portion of the stadium seats to make room for a stage. I always had faith in their team, however. Blue collar, hard working, compact, no huge stars. It's a classic underdog story. The once-Boca player Guillermo-Barros Schelloto pulls the strings in a most-Argentinean manner rekindling the days of Ortega, Veron and Co. Robbie Rogers is the American starlet that featured in the Olympics (without much impact). Hesmer is the goalie with mistique, Moreno the default #10, accompanied by US international and surfer Frankie Hejduk, plus Eddie Gaven, Nigerian Olympic medalist Emanuel Ekpo, and a host of other characters make up the new MLS bandwagon team. MLSRumors founders and current proprietors are also big Crew fans. It was a steady rise to the top for Sigi Schmid's team, both on the pitch and in the stands. They steadily made their way to the top brushing aside Chicago, DCU and the Revs. Their top form earned them a Supporter's Shield title (League championship, so to speak, based on regular season standings, a place in next year's Concachampions and a berth at next week's MLS Cup. So let's toast to the most hardworking team in the league! Being smart in terms of youth-experience balance, staying away from a DP, and ultimately winning the day through the impecable job done by Schmid has trully brought this team to the main stage at last. Here's to one of the original MLS 10 that actually kept their [at times regarded as silly] name. Bring it on, RSL/NY. A new champ will be crowned and maybe, for once, it will be the right team.
A few moments with the Crew (Guillermo always in the mix):

The whole team?! Wow, sounds like a challenge for one worthy nympho.