USA-Nigeria: so much for the afterlife 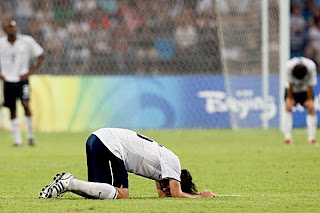 Mistakes that cost us a trip to the history books: needles fouls, two at the end of the game versus Holland (one by Bradley to see him miss tonight's fateful game and one by Holden that set up the tying free kick), then another one by Orozco in the beginning of tonight's game that saw a red and left team USA with 10 men and zero options. Missing Adu also hurt since Kljestan was lonely in the midfield and Feilhaber was useless when he stepped in for Altidore (?). It is clear to me now that Adu and Bradley are important pieces of the American puzzle for our future outlooks, that more discipline on the pitch is needed, and that our over 23 players like Donovan, Beasley, Bocanegra, Onyewu, Dempsey and even Eddie Johnson still have a job and for pete's sake... give us something to be proud of in the qualifiers!
So last night I went to be before 10, did not sleep well and woke up around 3:30, saw a terrible game until Nigeria scored its second goal and then went back to bed. Much better now physically but hurt mentally just like Jamie Trecker's rants and Steve Goff's subtle report on the game. We, as I stated in the last post, had our hands on history and all we needed was a measly tie. It slipped away from us like the Titan's last play in the 2000 SuperBowl or the Cubbies' fateful ball [that Alou could have caught] in 2003 in the Bartman incident or like Ecuador's near-historic win in Argentina on a June 2008 night that allowed a tie the very last second of the game in stoppage time.
Today is a sad day in sports, folks. Let's carry on with everyday duties.
Posted by R. Mera Velásquez at 9:51 AM

Cubs fan correction - the 2003 play you refer to is the Bartman game. Bartman actually robbed Moises Alou of a chance to catch a foul ball, not a home run, leading to a huge inning for the Marlins. History judges Bartman harshly, for Alou probably would not have caught the ball anyway and it was Alex Gonzalez's subsequent booting of an easy double play ball that in my opinion cost the Cubs their shot at World Series glory.

Thanks for the correction, bud!