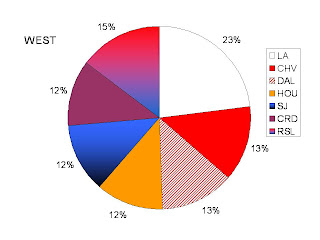 OK, enough with the Olympics and the latest Olympic failure. Back to MLS. It was a slow weekend all around as the total attendance stats show. Attendance was average even in relative terms (~75% for the east and ~65% for the west). Keep in mind that there was no Beckham circus this past week and that a good amount of players were missing due to Olympic call-ups. Most notable was the low attendance for the Colorado-TFC game although it should not come as a surprise. Pleasant surprises were the numbers at New England (19K+) and New York (15K+), with an exclamation point on New York since the fans saw their team win decisively.
You'll note that I have eliminated a couple of the ads on the right column and permanently added medians to the list. From several threads on BigSoccer.com, it became evident that an important way to show MLS attendance trends minus Becks was to take out the outliers that changed the means and relative attendance for teams like San Jose, DC, and New York.
Additionally, I thought it would be nice to look at the percentage of the total numbers that each team accounts for in a pie chart, this time for the western conference. You'll note that teams match up pretty evenly throughout and this also compares to the numbers seen in the average and median attendance plots. LA leads, of course.
Posted by R. Mera Velásquez at 11:23 PM

Can I add your blog to soccerblogs.net?