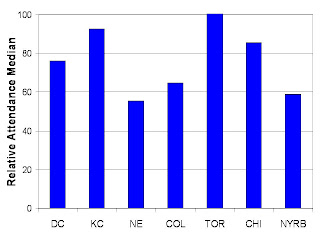 It's nice to see the girls get it done in the Olympics. In the meantime the USMNT does their job in Guatemala amidst ridiculous claims that Lewis' facial gash was unintentional when the replay clearly shows the Guatemalan extending his elbow maliciously. To each his own, I guess. And what about the MLS? In the meantime life rolls along and numbers remain average at best (~75% for the most part. Becks and the Galaxians "visited" the Goats and once again sold out the HDC. Chicago continues their run of good form with another near-capacity showing thanks in part to Blanco. McBride should technically keep a good chunk of the crowd coming once Cuau leaves for his homeland (they sorely miss him... just look at WCQ highlights of Wednesday's match against Honduras).
As I had promised previously and keeping with the attendance median theme, I decided to calculate medians for the relative attendance. So, instead of just showing what the median attendance is for each team (which effectively negates the Beckham factor for the other 13 teams in the league), we can now see just how full a stadium is during most of the matches.
I'm including two additional plots here, one for the East and one for the West. Back east New England and Columbus are isolated with low attendances. Notice that New Englands relative attendance average is much higher due to the Brazil doubleheader. DC's numbers are also brought down a bit and from my "star power" analysis Gallardo doesn't seem to be drawing that many fans. New York remains below average even after the Becks crowd, and after last weekend's 11K+ crowd things aren't looking that much better. Also note that KC's numbers are bolstered by their smaller stadium. 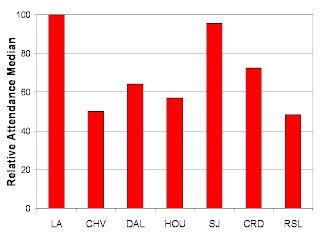 The West has the same stories with interesting caveats: RSL's numbers used to be among the best in the league and their lack of form, until just the past couple of months, has taking its toll on numbers. Maybe the new stadium will bring new and old fans alike. Chivas is also showing why its critics are being so harsh and are calling for rebranding and relocation. FCD hasn't been notoriously good in terms of attendance and this analysis also touches on that. Finally, Houston's numbers are low mainly due to its capacity (27K) but generally enjoys crowds that would readily fill 80-90% of smaller SS stadiums.
Posted by R. Mera Velásquez at 11:56 PM