The loss of Altidore cost the USMNT the World Cup 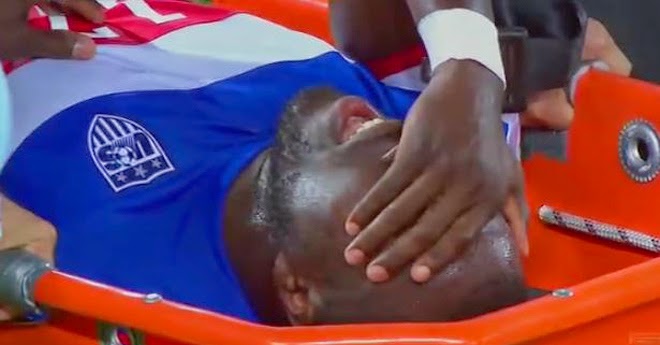 Let's admit it. When we saw Jozy Altidore reach for his hamstring 21 minutes into the first half of the US-Ghana match we all knew it was over. Of course, we were wrong. Dempsey filled in for Jozy for the rest of the tournament and the young guns, Brooks, Yedlin and Green, rounded out an acceptable performance for the USMNT at the World Cup.

And yet, playing Monday morning center back, the realities and frailties of the national team and of Klinsmann's approach were apparent. Altidore was always the key for the possession/attack team we wanted to see and the manager had no backup plan. Here's why:

1. Michael Bradley
You will recall that Bradley, usually a defensive midfielder, was pushed higher up the pitch against Nigeria in a World Cup tune-up. The team flowed, Altidore scored, we all believed. Take away Jozy and Bradley has no outlet. Dempsey isn't a target forward and he tends to retreat to find the ball. This puts Bradley in limbo and we lose our playmaker as he dissolves into defensive duties.

2. Possession
Along with Michael Bradley losing the ball, and Dempsey's retreat to midfield, the ball is no longer in the opposing team's half. Altidore does more than score. He can hold the ball and defends higher up the field. Without an outlet down the middle for Bradley, Zusi and Bedoya are left to do all the work along the flanks. There, they found quality opposition and their weaknesses were exposed.

You can argue that Yedlin+Johnson would have been a good combination. However, Johnson succumbed to yet another hamstring injury. Had Donovan been available, things may have been brighter on the flanks.

3. Defending the middle
Things became so cluttered at times in the midfield for the US that we gave up balls around the middle of the pitch. The two center mids format with Jones and Beckermann works only if Bradley is allowed to play offense. Without Jozy and a retreating Dempsey, the field of play is shortened. Note that major goals were allowed down the middle, especially Nani's and Belgium's first.

4. The second forward
Clint Dempsey is better as an advanced midfielder role, or, better put, a hovering number 11. He's better when he gets service that he can then bounce off of a fellow attacker, i.e. Altidore. Johannsson was largely missing versus Ghana, and Wondolowski was ineffective in his cameos. He's not particularly fast and isn't a prodigious passer either. He's a poacher and there weren't enough chances created.

The truth is there was never a replacement for Altidore. And, despite his poor scoring form with club and country, his skills served a far greater purpose: possession and defense. Eddie Johnson and Terrence Boyd have similar attributes but neither have his experience, vision, and natural abilities. Juan Agudelo is another possibility here.

We are now left to wonder what it might have been like with Jozy on the pitch in all those games.
Posted by R. Mera Velásquez at 3:08 PM