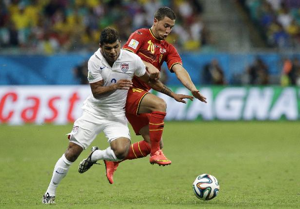 DeAndre Yedlin played a pivotal role for the USMNT in Brazil. He provided speed, width, defensive cover, and adaptability versus some of the world's top teams. Here's a look at what makes him special and why he should be at a top club in Europe.

On a humid Manaus night on 22 June, the US vs Portugal match was tied 1-1 after Jermaine Jones' golazo. Bento, Portugal's coach, knew that he needed a game-changer in order to win the match. In came Varela. Klinsmann saw this as a highly offensive-minded move and knew he needed some speed to help Fabian Johnson. He inserted DeAndre Yedlin, the 20-year old Seattle Sounder, for Alejandro Bedoya.

1. Speed
Yedlin's impact versus Portugal was immediate. Portugal's left flank was covered. Further, Yedlin opened up spaces, ran around the defense and provided the initial setup for Dempsey's go-ahead goal. He also covered well for Fabian Johnson's absence versus Belgium and set up quality opportunities when he had the chance. This is a key factor for European suitors.

2. Width
Along with speed, Yedlin's ability to hug the line while he sprints and to push the ball ahead and still be able to recover adds an extra dimension to any team. This was seen in MLS during a Seattle-Portland match, where he tracked all the way into the Timbers' 18-yard box and drew a penalty.

3. Defensive duties
Yedlin is a right back. He's a modern winger. He is fast enough to be able to launch into the attack while at the same time covering his flank. He proved this versus both Belgium and Portugal. He repeatedly made life difficult for Varela, Postiga, Almeida and even Ronaldo.

4. Adaptability
DeAndre is a defender. He had never trained as a midfielder for the USMNT, but when he took the field versus Portugal he was inserted into the right midfield position. And he excelled. Klinsmann has never been shy to deploy players in very different roles (Brad Evans from defensive mid to right back) and his gamble payed off. This will be key if Yedlin were to transfer abroad, say Roma or Liverpool.