Dream final: Muller, Messi and the history of Argentina-Germany 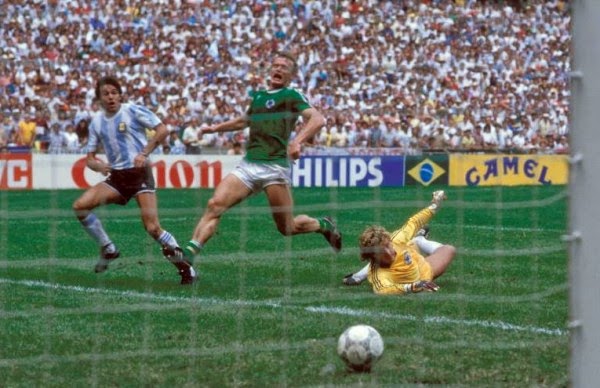 Wednesday's semifinal game was a only the fifth time that penalty kicks were used to determine a World Cup finalist. Argentina won via Romero and set up a classic finish. For some of us this is a dream final. Argentina versus Germany. Opposing styles, management, flavor.

Let me tell you a story now. Two stories, really. In the summer of 1986 I was only a small boy and soccer was something for grownups to watch and something to do during recess. Ecuador, my home at the time, had yet to qualify for its first World Cup and the US Men's National Team was only a memory of 1950.

I was enrolled in a German school for my elementary and the thought of cheering for West Germany was just . . . normal. So when I heard that they would be in the final I found myself to be the only one in the room cheering for the Germans. Everyone else was siding with Argentina and someone named Maradona.

The Argentinians jumped ahead by 2-0 before the Germans came back to tie the game 2-2. I still remember the name Karl Heinz Rummenigge being uttered over and over again. It wasn't until late in the second half that Argentina scored the winner, with Schumacher looking defeated on the ground as Jorge Burruchaga put the ball in the back of the net. Argentina won Mexico 86, but the final would repeat itself in 1990.

I was older in 1990 and I understood the game better. I remember us kids making a joke about siding with Cameroon for the opening game versus Argentina. "Cameroon will win," we said, knowing that, football-wise, this couldn't possibly happen. It did. Oman-Biyik put a header past Pumpido and shocked the world.

The Berlin wall had fallen at that point but the team that competed was West Germany. Its federation continued to represent the whole of the country thereafter. The Germans dominated, albeit unconvincingly, the opposition throughout the tournament, save for a tie versus Colombia in the final group stage game. They arrived at the semifinal to play a determined English side that had just knocked out World Cup darlings Cameroon.

Italia 1990 was special in the semis because both games went to penalties. Argentina defeated the host nation thanks to Sergio Goycochea and Germany won its game. This was the Germany of Brehme, Voeller, Hassler, Matthaus and Klinsmann. A talented squad.

This time the uniforms the teams wore were the reverse from 1986, when Argentina wore its albiceleste and Germany was dressed in green. In 1990 Germany wore its home white and Argentina its away dark blue. The game remained tied until the 86th minute, when the referee awarded a penalty to Rudi Voeller. Andreas Brehme put it away and Germany were champions for the third time.

I was happy, of course, given my school allegiance. We joined the parade of cars down the main avenue displaying my gym shirt with the German school insignia. Pride.

Things are different now. I concentrate on the US national team and its meteoric rise to the world stage since 1990. True, they are no superpower, but they have become a fixture at the World Cup and American players have slowly infiltrated major leagues worldwide. Major League Soccer has also grown both on and off the field.

And now that my teams (I include Ecuador here) are out of the World Cup and only the finalists remain, I am left with a bit of a quandary: do I cheer for Argentina or Germany? Messi, Higuain, Aguero and Macherano or Muller, Hummels, Khedira and Lahm?

I will not cheer for either team. I just want to see a good game. I feel Germany should be rewarded for being the best team in the tournament but Argentina has also won every single game until the semifinal's tie against Holland. Then there's the Messi factor. The guy is a genius and he has a chance to catch up to Maradona if he wins the World Cup. He's 27 and Maradona was 26 in 1986.

May the best team win in this dream final.