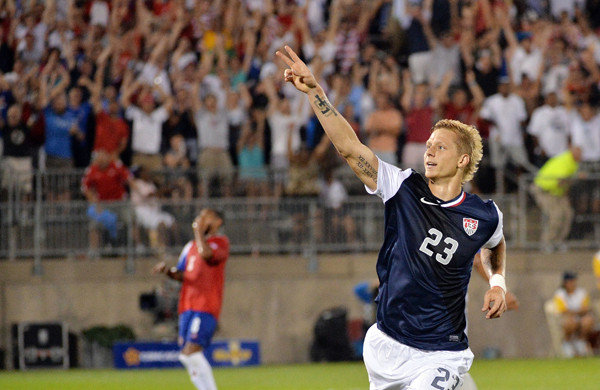 Brek Shea partly silenced some of his doubters when he scored the game-winning goal in last night's USA vs Costa Rica match. The Stoke City player was guilty of turnovers and a poor showing versus Cuba in the previous game but versus the Ticos he took a brilliant pass from Landon Donovan in a breakaway and put the ball past the goalkeeper. In so doing, the Americans got all 9 points from the group stage, got their all-time highest win streak for a national team (8), and set up a favorable quarterfinal versus El Salvador for this upcoming weekend.


The game versus Costa Rica turned out to be as expected, much more physical and difficult than lesser opponents like Cuba and Belize. Costa Rica put up a back line of 5 defenders and flooded the midfield, frustrating Holden and Diskerud, who was reversed from his usual attacking position to cover the defensive midfield. This took some of the bite out of the US attack and Holden was unable to provide the same sort of service for the attackers that had previously occurred.

Last night's game served as a showcase for what this "B"-side team is capable of in the later rounds of the Gold Cup as the competition becomes more complicated. Clearly, missing pieces like Michael Bradley and Clint Dempsey could have made a difference in a game that lacked clarity at times and a bit more bite from the Americans. Even so, Donovan, Holden and Diskerud carried the midfield admirably and were rewarded with a just win.

Wondolowski had a more difficult time versus Costa Rica mostly because the space in front of him was shut down by the opposing defense and the service from Diskerud and Holden was limited. A more physical player like Altidore might have had a better chance versus the Ticos but that is pure conjecture at this point.

The back line stood up well in the match. Few balls got through and those that did were quickly shut down by Goodson and Orozco. On the flanks, Beasley and Parkhurst had plenty of time and space for forays into opposing territory and serve good passes into the middle. The goalie, Sean Johnson, was especially interesting both negatively and positively. During a stint of 3 corners by the Ticos in the second half he did not get to the ball in the 6-yard box, a must for any goalkeeper. Instead, his teammates cleared the area of danger. However, Johnson did make several crucial saves, including the one that eroded Costa Rica's best chance and also served as a trigger for the game-winning goal.

It is clear that Klinsmann intends to give some of the younger players like Brek Shea quite a bit of slack for missed opportunities as a way to encourage professional growth. Shea has had an up-and-down career due mostly to injuries with Dallas and Stoke. Hopefully this will served to give him more confidence as he fights for minutes at Stoke City in the Premier League.