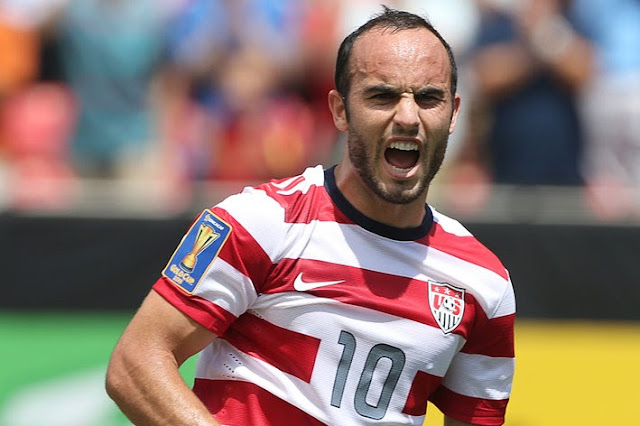 If anyone thought Landon Donovan's time with the US Men's National Team was over, they need to reconsider. Donovan has carried the team to two impressive victories in the Concacaf Gold Cup, 6-1 versus Belize and 4-1 against Cuba. Along with Wondolowski, the two veterans are getting it done. Throw in the impressive comeback by Holden and the new additions of Diskerud and Corona and suddenly you have a "B" team that doesn't look like a replacement squad.

Landon Donovan has looked like his old self. He scores PKs, he moves the ball quickly and securely, he sets up goals and brings confidence. Do not be surprised if he is chosen over Graham Zusi at the next full national team match, which could be a qualifier.

This is Donovan's team in the Gold Cup. He has brought steadiness to the team and a larger dose of purpose. Where Dempsey brings fantasy, Michael Bradley brings muscle and possession, Donovan is the fulcrum. Could the national team come back to its original midfield glory? Do not, however, ignore the work done by current starters in the qualifiers for they have been terrific and timely. However, it is certain that Donovan could elevate the team further.

Outside of Landon, Diskerud has been particularly impressive. He manages midfield like a professional, sets up pinpoint passes and distributes the ball well. Stuart Holden, on the other hand, has been the original X-factor he was 4 years ago. He could provide an instant upgrade to the midfield during a major match. Joe Corona, on the other hand, is the wave of the future. He's fast, internationally experienced with his club, and has shown good awareness. His goal versus Cuba was brilliant.

Lastly there is Wondolowski. "Wondo," as the San Jose ace is often called, has finally transferred his marvelous club form to the national team. If he keeps it up and scores in qualifiers, he could be a replacement for players that see a decline or others that may be too young (Boyd, McInierney). For now, the tournament truly begins against Costa Rica on Tuesday.