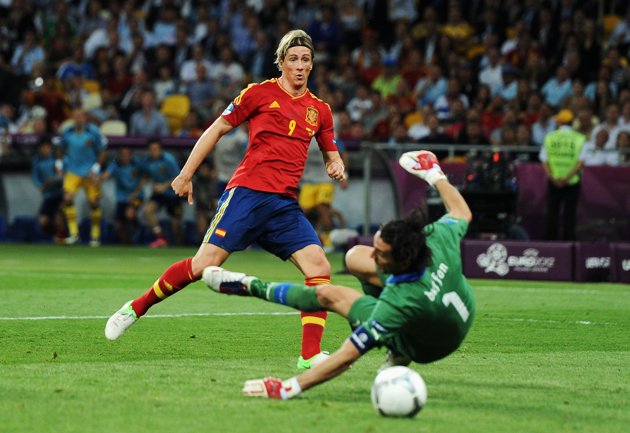 Spain defeated Italy in the Euro 2012 Final by the score of 4-0. In doing so, the Spanish broke new ground by being the first team to win two Euros in a row and 3 major championships in a row (World Cup 2010 included). And they did so in style.

The Spanish fantasy with the tiki-taka passes, intricate moves and never-ending possession is enough to make any opposing squad scramble to gain a foothold in a match. In group play, the Italians scored first against the Spaniards and frustrated their attack patterns. By the final, however, Vicente del Bosque had figured out a new way to deal with the Italians: shut down Pirlo and Balotelli. With this, Montolivo and Cassano were isolated and the Italians lost their primary weapon: building Balotelli's game.

Aside from the mastery in placing the right pieces against the Azzuri, was the 6-man midfield, which Del Bosque corrected: It's three attackers. A 4-3-3? Why not? It's a 4-6-0 in disguise with Silva and Iniesta as co-anchors for Fabregas. And it worked. In fact, it worked during the whole tournament.

Re-writing midfield-attack strategy is just one facet of the Spanish game. For when they see that a change is needed, a number 9 like Torres can step in to deliver. Up 2-0 versus Italy late in the second half, El Nino came in to finish off the game. Juan Mata, the new rising star in this team, put the game away with a 4-0.

Spain is about fantasy, about goals, about us liking the game for what it's supposed to be: quick, direct, and fun to watch. This is arguably the best national team ever put together, at least for the last 4 decades, if we are to count Pele's Brazil in 1970. But this team is more complete from goalkeeper to forward. They know how to win and they do so in style.

The Spanish national team has broken record after record in recent times, but one in particular remains: no European team has ever won a World Cup in the American continent. That Brazil is hosting 2014 just makes things more special. If there is a group of players that can break this record, then it must be pure dream, fantasy, supernatural. And right now, Spain is riding high on being magical.
Posted by R. Mera Velásquez at 12:40 AM