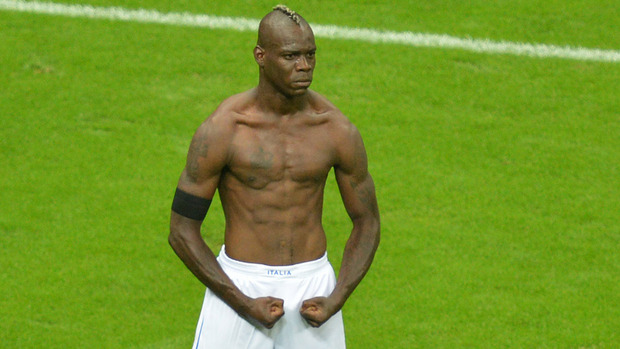 Italy has a new force in their team: he's fast, he's outspoken, he has a superb nose for goal, he got them to the Euro 2012 final. Yes, Mario Balotelli made the difference today with two superb goals against the heavily-favored German national team. No Ozil, Mario Gomez, Schweinsteiger, Khedira or Muller at the final this time.

For too long, Italy has been the face of antifutbol: all defense, low scoring, dirty plays, and tough to watch. Enter Prandelli and suddenly this team flows. Andrea Prilo is free to roam, Montolivo can create plays, Cassano drifts forward and Balotelli, well, he is Balotelli.

We have seen a true revolution in the Italian national team, one that resembles Germany's shift while under Joachim Loew, or Spain under Luis Aragones. The Italians have slowly imposed their new style and speed upon their comptition in a slow, constant, naturally Italian manner. It was still low scoring, but scoring when and where it counts.

Like any true aspiring champion, Italy saved its best for the semifinal and against a team that knows how to attack and muscle their way to win matches. Germany has its own flavor and formula for winning: Boateng-Ozil-Gomez, and variations thereof, but when their attack is neutralized by Bonucci, Berzagli, Chiellini and Balzaretti, and goalkeeper Gianluigi Buffon, then their game is gone. It is the best of Italy.

And yet, added to all the antifutbol qualities that may still exist and are inherent in the Italian game, one thing is for sure: Mario Balotelli. Perfect header for the first goal and a Romario-esque cannon blast that Neuer didn't even try to save for the second goal. That's what Italy needed and what has been missing from this team in the past. A new way to the goal, a different perspective, a faster outlook, a means to allow Pirlo and Montolivo to create beautiful soccer. Forza Italia, their final against Spain will be fun to watch.
Posted by R. Mera Velásquez at 1:38 AM

Talent transcend brazenness!!!! Mario as per ur story seems like very very passionate player and does not want to compromise anything even his life and that is nothing except beyond or extreme!!!!!!! But for good for sports,nation and may be not for himself as some people may not like his style!!!!!!! Its ok being different means challenging the normal and we have normal people around the world and nothing wrong in that as long as he loves all of them!!!!!! It seems some people are picking on him for the reasons known to them!!!!!!!! May be his style which is natural!!!! He is unique and different because of style!!!!!!! Imagine taking mike pheleps style of agression he wont be able to make gold in olympics!!!! Remember living with the different values and behavior also means real meaning of democracy!!!!!!!!!!!!!! Anyone who is being raised in different value system and environment will have personality of different kind and that is versatile!!!!!!!!!!!! Better respect him or get ready to face the world criticism. Of course not mario if he has to remain like that he has to remain focus on this strength and that is nothing except passion for game and loving people!!!!!!!!!!!!!!!!!!!!!!!!!!!!!!!!!! Moral:--- love one and love all and move