The Special One returns with Madrid's triumph 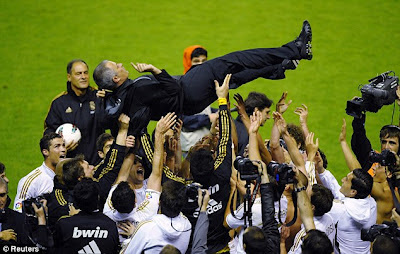 There are a few characters in life worth noting. In sports, in soccer for the purposes of this blog, this may take the form of Cristiano Ronaldo, Messi, Valencia, Clint Dempsey or Zidane. However, this is only part of the equation. The other side is the coach and there are plenty of big personalities out there when it comes to this category: the cool and calculating Franz Beckenbauer, the fiery brilliant Sir Alex Ferguson, and the antithesis of modesty: Jose Mourinho, a.k.a "the special one."

Jose was never a great player and only participated in modest clubs in the Portuguesa Liga such as Belenenses and Comercio e Industria. He first started as a translator for Sir Bobby Robson with Sporting Clube, Porto and eventually Barcelona. His full coaching career began with Benfica and Lieira, where he found modest success, although the latter attained its highest ranking in the league in club history.

Mourinho's breakthrough came while coaching Porto, which he took new heights by winning the UEFA Champions League with a win over Monaco after eliminating Manchester United, Lyon, and Deportivo La Coruna. As a side note to American fans, the win versus Manchester United came thanks to a serious gaffe by Tim Howard. After Porto came a blockbuster move to Chelsea of the English Premier League in which he earned £5.2 million. Jose won the Premier League in 2005 and 2006, as well as the League Cup in 2005 and 2007 and the FA Cup in 2007.

After continuous disagreement with the Chelsea owner, Roman Abromovich, he resigned from his post as coach in 2007, having never won the Champions League. This would change, however, when he became coach of Inter Milan in 2008. He won the Italian Serie A that same season and also in 2010. Further, in 2010 his Inter achieved the treble by winning the Serie A, Coppa Italia, and the Champions League.

His move to Real Madrid in 2010 was reminiscent of his appointment at Chelsea: a big money club in need of a trophy. Indeed, Barcelona had been champions ever since Guardiola took over as coach in 2008, so re-taking the crown was a paramount objective for the Madrid club. Mourinho still finished second in his first season (2010-2011) but won the Cup that same year. However, he injected new talent into the squad with moves for Mesut Ozil, Sami Khedira, and Angel Di Maria. Thus, he effectively crowded out his midfield that already included Xabi Alonso, Cristiano Ronaldo and Kaka. However, this depth would become valuable in the future.

Also in his inaugural season with the club, a meeting with Barcelona in the semifinals of the Champions League resulted in some interesting Mourinho "moments." He was critical of the referee in the first round at the Bernabeu and was suspended for the second game at the Nou Camp. Always a competitor and always outspoken, he alleged that a "conspiracy" was behind his loss to the Catalan club.

Mourinho toned it down this past season. He quietly (relatively) and steadily gained ground in the league as Barca faltered time and again. He was outspoken still, yes, but he took a far more calm approach to his job. As Bayern Munich eliminated Real Madrid from the Champions League competition last week, we could see his maturation in his frustrated yet surprisingly calm reaction to his star players, Kaka and Ronaldo, missing their respective penalties. The Special One knew that he had taken the necessary next step in his career by winning the Spanish Primera outright. Earlier that week his team had won at the Nou Camp by the score of 2-1 over Barcelona, effectively ruling the Catalans out of the crown.

The Special One isn't done yet. He knows he must achieve his goal of bringing the Champions League crown back to Madrid. He certainly has the tools for the job but his approach must be more cautious in the defense than it was against Munich. Marcelo and Sergio Ramos, in particular, stretch the back line too far through their constant forays forward. This pulls the central defenders wide and exposes the middle of the pitch for the opposing squad. Pepe's recourse in that match was to concede a penalty.

Perhaps it will be in the defensive end that Mourinho finally strikes gold for Real Madrid. One or two more acquisitions or departures might achieve this goal. He has, after all, a potent attack that spreads talent into every blade of grass on the pitch. He's a special coach that doesn't shy away from substitutions in the middle of the first half. His theme isn't a "we must win," but instead chooses another phrase: "we cannot lose." As he once put it when he was hired at Chelsea: "Please don't call me arrogant, but I'm European champion and I think I'm a special one."

Congratulations, Mr Mourinho. The soccer world wouldn't be the same without you.

And now for something funny: