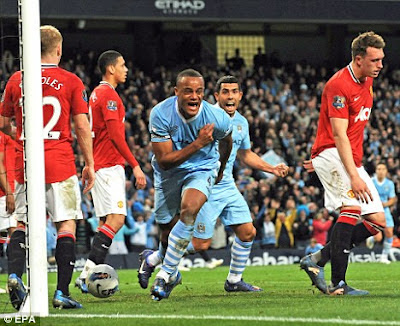 When a soccer match takes over the headlines of CNN.com, you know something special occurred. Today, in England's version of Monday Night Football, the Premier League match of the century took place as Manchester City's Etihad stadium hosted the Manchester United - Manchester City derby. This rivalry is as fierce as any around the world: Real Madrid - Barcelona, Celtic - Rangers, Inter - AC Milan, Emelec - Barcelona de Guayaquil, Yankees - Mets, Giants - Patriots, UNC - Duke. The game transcends time and space and everywhere in between.

The atmosphere was as exhilarating in the stands and on the pitch and all the way to each one of the 650 million video display devices around the world. Yes, that's almost 10% of the world's population watching a league match. And the reason for it, besides the considerable talent on the field, is that at the time only 3 points separated Manchester United (83 pts) and Manchester City (80 pts) with two more games to go. Anything but a win would be a huge blow for City.

The game certainly didn't disappoint. From Yaya Toure's strength in possession to Lescott's timely clearances to Kompany's game-clinching goal, Manchester City had plenty to offer. Sir Alex Ferguson offered a watered-down version of the mighty Manchester United. No Valencia, no Hernandez or Welbeck, no Ashley Young. He went with experience and defensive midfield in Paul Scholes and Ji-Sung Park. Sadly for him, for Man U's hopes, and for the millions of United fans out there, this approach did not work.

The introduction of Antonio Valencia and Danny Welbeck midway through the second half was countered by Roberto Mancini's defensive substitutions of De Jong, Milner and Micah Richards. Mancini cluttered the midfield and United looked as directionless as it had for most of the game. And although Samr Nasri and Aguero could have put the game away on multiple chances, the truth is that City had this game under control after about the 15th minute. They rarely lost the ball and, when they did, United could not muster a good shot.

All is not settled in England after this game. Indeed, it is far from it. Manchester City will need a positive result at Newcastle, a feat almost as difficult as Manchester United, and then they will need to take care of business when they host Queens Park Rangers. United, on the other hand will be hosting modest Swansea before finishing the season at Stoke City.

From the Scholes versus Toure scuffle to the Mancini versus Ferguson war of words, this game did not hold anything back. There were plenty of "ahs" and "no's" today as well as cries and singing the Blue Moon. Even Liam Gallagher of Oasis and Diego Armando Maradona were singing a modified version of the Beatles' "Hey Jude." Instead, the chant was "nananana, nananana, City." For us neutrals it was a beautiful thing to watch City defeat United when one contemplates that someone new might win the title this season and that it will come down to, possibly, the final game of the competition. This is why we skip work on Mondays or stay up late to watch the game, because this Manchester derby was worth the hype.